The Vancouver Aquarium has released a new video showing the recovery of a false killer whale rescued near Tofino in July. 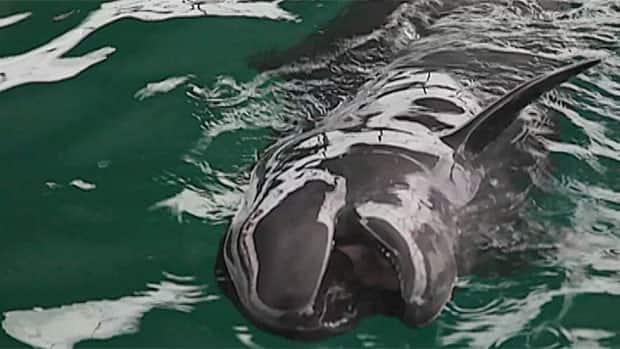 The Vancouver Aquarium has released a new video showing the recovery of Chester — a false killer whale rescued near Tofino in July.

The video shows the cetacean playing in raindrops dripping from the tarp over his habitat at the Vancouver Aquarium Marine Mammal Rescue Centre.

In a statement, the aquarium says the false killer whale is developing muscles and improving strength.

"Earlier this month, the water in Chester’s habitat was raised to almost double the depth, giving him increased space to dive deeper, swim faster, and even begin to attempt leaps and breaching," the statement said.

"Chester now weighs more than 116 kg and is more than two metres long. His teeth have mostly erupted now and he’s eating about seven kilograms of herring, capelin and Spanish sardines per day."

The aquarium estimates the calf is about six months old, and says although it is doing well, it is still undergoing rehabilitation and being monitored by the team at the rescue centre 24 hours a day.