CBC reporter Megan Batchelor says she's gotten a lot of support and some opposition after she received unwanted attention from a man who kissed her and took a selfie while she was doing a live hit for television. 'It's just not OK': CBC reporter on unwanted kiss

5 years ago
5:43
Megan Batchelor describes her reaction to being kissed by a stranger in the middle of a news report 5:43

CBC reporter Megan Batchelor says she has gotten a lot of public support after a man kissed her on the cheek and took a selfie while she was reporting live from the Squamish Valley Music Festival on Friday evening.

"The support has been just amazing," Batchelor said.

"But of course there are people out there who feel I'm overreacting, and I was at a music festival so I was asking for this kind of thing."

It's 2015. People don't want to be kissed by a random guy. It's not funny. It probably makes her feel unsafe. I'm with you <a href="https://twitter.com/MegsBatchelor">@MegsBatchelor</a>

Batchelor says she felt compelled to file a police report about the unwanted physical contact so she could try to halt the wave of similar incidents against female reporters. 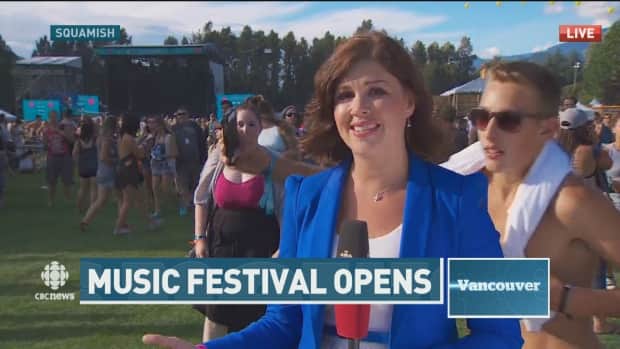 5 years ago
0:33
A reporter gets unwanted physical contact during her live hit on air. 0:33

"I felt like if I didn't do something about it, then I'm making it look like it's OK for people to do this to myself and to my colleagues," she said.

"To have someone run up and just touch you or kiss you on the cheek or do something unwelcome, it's just not OK regardless of where I am or what atmosphere it is."

Batchelor said although the incident wouldn't keep her from reporting and enjoying her job, it would put an air of caution on her future live hits.

"This does change the way I feel when I do go out," Batchelor said. "Now there's that extra thought in my head that this could happen again."

"This is another example of a disturbing trend and we're doing everything we can to ensure our journalists are safe when reporting from the field," Thompson said.

Anyone with information about the man who approached Batchelor should contact Squamish police directly at 604-892-6100 with the file number 2015-5227.

It is one of many incidents over the past year where female Canadian journalists have been disrupted on air.

Earlier this year, Toronto's City News reporter Shauna Hunt confronted the men who shouted crude remarks into her microphone and defended it as part of a popular trend of harassing female reporters on air by yelling "f--k her right in the p---y."

CBC reporter Charlsie Agro also filed a police report in Toronto after a man shouted the same notorious misogynistic slogan during a live broadcast of the Pan Am Games closing ceremony.

With files from CBC's Tamara Baluja