Many of the more than 100,000 noisy Canucks fans who had jammed into the fan zone in downtown Vancouver started leaving before the end of the second period Wednesday after the Boston Bruins had scored three unanswered goals in the deciding Stanley Cup game, being played just a few blocks away in Rogers Arena.

Police say they are prepared — whether the Canucks win or lose 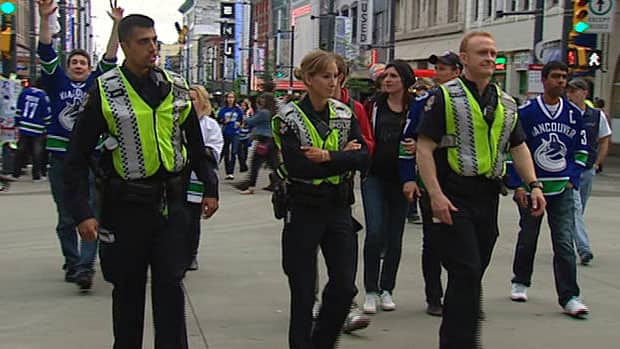 Many of the more than 100,000 noisy Canucks fans who had jammed into the fan zone in downtown Vancouver started leaving before the end of the second period Wednesday after the Boston Bruins had scored three unanswered goals in the deciding Stanley Cup game, being played just a few blocks away in Rogers Arena.

Many of those taking an early exit were parents with young children, concerned at the threat of over-crowding and at the increasingly dismal prospects for the Canucks as the game progressed.

Other were younger fans, too apparently disappointed to hang in for the duration.

For those who were choosing to stay, it was painful.

"It feels terrible," said Jose Godoy, a fan sitting on the Hamilton Street wing of the fan zone. "the Canucks aren’t playing their game. Their forecheck is gone and they have no confidence basically. They’re out, they’re done."

Earlier, police had to cut off access to the fan zones for the first time in the playoffs just before game-time due to potential overcrowding. Where people had been able to enjoy the games sitting on the pavement of West Georgia Street and Hamilton Street just outside the CBC, it was standing room only on Wednesday.

The anxious fans had begun setting up lawn chairs early in the day, even before the arrival of the trucks carrying the outdoor screens and the army of city workers and police setting up barricades.

Others had lined up outside bars, claiming seats inside, or searching for tickets from scalpers and brokers.

Transit officials reported crowds were so large by 2 p.m. that buses in the downtown core were being significantly delayed. Both SkyTrain and the SeaBus also ran at near full capacity most of the day.

BC Ferries sailings from Nanaimo and Victoria were jammed with 800 passengers on each trip, and extra buses were dispatched to meet them.

Hoping for reason to party

If the Canucks win, it's expected fans will kick off the biggest party in the city's history — even bigger than the massive street party that took place in the city last year after the Canadian team won the Olympic hockey gold medal.

But if the Canucks lose, police say they are prepared to head off any unruly mobs hoping to spark a repeat of the infamous riot that followed the team's loss to the New York Rangers in the final game of the 1994 Stanley Cup final.

Police said much has changed since those days, including the closure of downtown liquor stores hours before the game begins, better targeted crowd control, bag checks at transit stations for liquor — and perhaps most importantly — a family-friendly mood in the massive fan zones set up on the streets.

"The key for us is really getting out and employing that meet-and-greet strategy. It's about positively engaging the public and getting out there and shaking hands and posing for photos and high-fiving and saying 'hello', and not standing off in a corner somewhere," said Const. Lindsay Houghton.

"Long gone are the days where officers wouldn't be out on the street or interacting with the public. For us now it's being part of the crowd," said Houghton.

"When we see a hotspot in the crowd we just move our resources over there quickly," Vancouver police spokeswoman Const. Jana McGuinness said.

"We are not anticipating any problems — just a really boisterous crowd. Win or lose, we expect to be out there until 5 a.m.," she said.

It's been two months since the team's gruelling playoff run began, and this is the team's last chance to defeat the Boston Bruins and seal the deal.

The Vancouver Canucks have never won Canada's most famous sporting prize in the team's 40-year history, and after decades of praying and cheering, fans are hoping tonight is the night their dreams will come true.

Pat Quinn, who was the Vancouver coach last time the team played Game 7 in the Stanley Cup final, said the dramatic swing in performances for the Canucks between home and away games in the series has been startling.

But with the home-ice advantage for Game 7, he said the Canucks will have a statistical advantage.

"Historically, we've seen that only three teams out of 20 or something like that have been the visitor and won a Cup. I don't know if it's the crowd, if it's facing that 'Tonight it's over if we don't do it right,'" he told CBC Radio.

One of the major successes of the playoffs has already been the massive fan zones created by the city, shutting down several blocks of the downtown core to traffic and broadcasting the game on the outdoor screens, including two outside the CBC building.

On Friday night after the Canucks' win in Game 5, about 100,000 fans were on hand to celebrate well into the evening and police reported they seized about 3,000 bottles and cans of liquor.

But apart from one incident involving people who were arrested attempting to smash the windows of the public library, police have reported the fans have generally been well behaved during the celebrations.

For Game 6 on Monday, police did order 18 downtown liquor stores to close at 4 p.m., and that order remained in place for Game 7 on Wednesday.

Dozens of portable toilets and extra trash cans have also been staged around the site. City officials have estimated the total cost for hosting the celebrations and for policing will run about $1.2 million.

Other municipalities across Metro Vancouver have also hosted their own fan zones with giant screens, with about 5,000 turning up to watch games at the City Centre Plaza in Surrey.

Similar events are being held at:

Social media on the game