A North Vancouver homeowner is facing a hefty bill for the removal of an old oil tank found buried on her property, and she says municipalities should help cover costs. 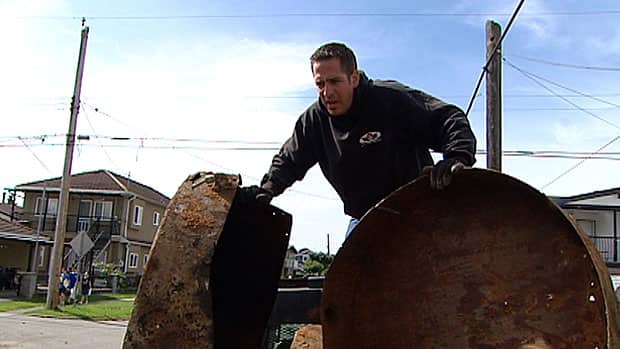 A North Vancouver homeowner is facing a hefty bill for the removal of an old oil tank found buried on her property, and she says municipalities should help cover costs.

Susanne Carrillo owned her North Vancouver home for 20 years before deciding to sell. When she did, she found out an oil tank was buried under her property.

The tank, a remnant of the city's switch from oil to gas heating, contaminated the whole front yard. Carrillo was forced to pay $85,000 to have it removed and to have the land decontaminated.

Under North Vancouver's municipal guidelines, if you are selling your home and a tank is found on the property, it must be disclosed to the buyer and removed. The seller must pay the full cost.

Carrillo says she had no idea the tank was there and is appalled there is no help from the municipality for homeowners in her situation.

"It was left in the ground and there was still a whole bunch of oil left in it," she said.

"Why is it left to the moment when somebody sells their house then you point the finger at that person and you say: 'Okay, you! You're responsible,'" she asked.

Kevin Shellard, owner of All-Pro Oil Tank Removal, said that oil tanks are also known as Residential Underground Storage Tanks, or RUST, and are usually found in homes built before 1970.

Usually, a close inspection of a property and its fixtures can reveal whether a tank is still around, he said.

"There's a few clues that you could look for. There's a filler cap in the yard, or a vent pipe up the side of the house, or near the furnace, you have copper feed lines that come through," he said.

Shellard said that about one in five tanks his company removes has oil seepage issues.

A seller caught paying the bill for cleanup can go through the courts to try to recoup costs from a home's previous owner, but it's a drawn-out process.

Carrillo is meeting with her MLA and two district councillors to discuss the issue.

The District of North Vancouver says the only time it would get involved is if the tank leaked onto city property.