B.C. Attorney General David Eby says a new federal report that says HIV is primarily a public health issue will help the province update its guidelines on whether it pursues criminal charges against people who do not disclose that they are HIV-positive prior to sexual activity.

B.C. Attorney General David Eby says a new federal report that says HIV is primarily a public health issue will help the province update its guidelines on whether it pursues criminal charges against people who do not disclose that they are HIV-positive prior to sexual activity.

However, Eby would not say if B.C. will follow Ontario's lead, which announced Friday it will no longer prosecute cases of HIV-positive people who don't disclose their status to sexual partners if there is no realistic possibility of transmission.

In the past, people who have not disclosed they are HIV positive prior to sexual activity have faced assault or sexual assault charges. But advances in treatment have shown that the disease is now manageable. And the risk of transmission is negligible among people who are on a treatment plan.

While the province sets its own guidelines for pursuing criminal charges, Eby noted Ottawa makes the laws.

​"Our Crown counsel will be looking at this and developing and enhancing our own prosecutorial guidelines and deciding whether to prosecute, because we are bound by the federal law on this," Eby said.

Eby's announcement came in response to a new federal report that says HIV is primarily a health issue.

In a release, the Department of Justice said the report represents a "significant step forward" in addressing concerns about the the over-criminalization of HIV non-disclosure.

Fear of prosecution has prevented people from getting tested and seeking treatment, said a release from the federal Department of Justice.

The report was developed with the Public Health Agency of Canada.

The federal report says that although an HIV infection was once fatal, people receiving treatment can now live normal lives and have a low risk of risk of transmitting the virus.

"Our government is taking action to help reduce the stigmatization of persons living with HIV, including undertaking an evidence-based approach to addressing HIV non-disclosure in the criminal justice system," said federal Justice Minister Jody Wilson-Raybould in a release.

Wilson-Raybould says the report will guide her work with provinces as Ottawa sets out to review existing charging and prosecution practices.

Eby did not comment on Ontario's new direction, but applauded the federal report.

"It's very important that the federal government has released a report and done research about the obligation of individuals to disclose their status and potential criminal liability that can result from non-disclosure," he said.

He says Crown counsel in B.C. will review the report and he expects recommendations for policies to be "modernized and enhanced by the federal government's report."

Watch this news story from 1987, when a bill was introduced that sought to quarantine people who had developed AIDS. 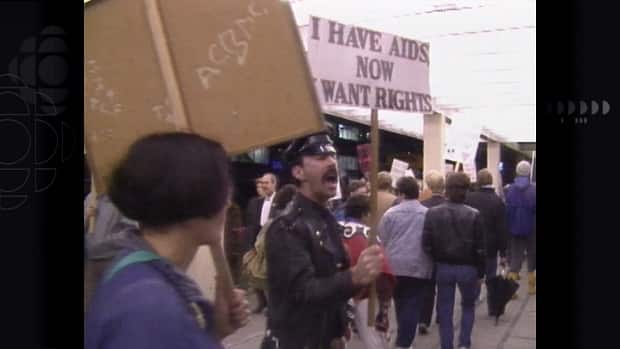 B.C. bill from 1987 would have quarantined those with AIDS

3 years ago
1:45
It was called Bill 34 and it would've quarantined anyone living with AIDS. The bill faced heavy opposition 1:45

With files from Canadian Press.