The fine art of survival: 'Dance should exist anywhere,' including container trucks

Part 2 in a series about living and creating in Canada's most expensive city. The creators of Boombox were looking for rehearsal space. So they created their own.

Vancouver dancers Katie Lowen and Diego Romero were on the hunt for cheap rehearsal space when a Craigslist ad caught their eye. It was for a container truck meant to store and ship furniture.

They had originally been searching for a garage or warehouse space, but something about the empty container screamed possibility.

"I just remember turning to Diego and I was like, 'We can't not do it,'" Lowen said, sitting on the steps of the container she and Romero have now owned for three years.

The container, about 16 meters long by three meters tall and three meters wide, is now an informal rehearsal and performance space Lowen and Romero call Boombox. It's parked in a secret location.

This past year Boombox hosted six shows, each with about 30 audience members inside the narrow space. 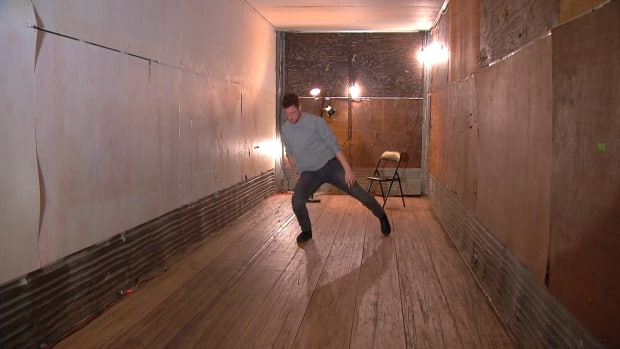 Take a look inside a dance studio on wheels

2 years ago
2:03
Boombox is one of Vancouver's newest dance spaces. But it's not what you might expect. 2:03

Boombox is just one of the many ways artists in Vancouver have had to find creative solutions to living and creating work in Canada's most expensive city.

With real estate at a premium, artists with meagre incomes face trying to find both affordable homes and work space. This three-part series focuses on those who have found creative solutions to those barriers.

Lowen and Romero pay $580 a month to rent Boombox, plus fuel for the generator that runs lights and heat inside.

It's a fraction of the costs they would pay to rent a studio, which can be up to $30 per hour.

It takes about 50 hours of rehearsal time to create a 15-minute solo, so the savings are considerable. And renting a venue costs about $1,000 per day.

Other than costs, the pair emphasize Boombox's role as a community space. Lowen and Romero let other dancers rehearse and create work in the container truck for free.

"Being a dancer is hard," Lowen said. "It's a big part of the community to be able to offer what you can back."

In exchange, Boombox reaps the income from performances that take place there. Lowen and Romero aim to break even each month.

Contemporary dancer Josh Martin, co-artistic director of Company 605, has been at Boombox rehearsing a solo for an upcoming performance there on June 15 and 16.

Martin says it's the beginnings of what he hopes will become a longer piece of work. He accepts the narrow confines of the space as a challenge.

"I'm always excited to jump into a different space and see what that brings," Martin said.

It's not just the financial aspect of Boombox that attracts Martin to the space — it's also the freedom to just be there and create work without any additional pressure.

Lowen and Romero don't restrict renters in any way. Unlike residencies or funding applications that require dancers to state their artistic vision and anticipated output, Boombox renters can just have a conversation with the owners.

"We have no interest in controlling what artists do in here,"  Romero said.

Lowen and Romero are careful about who they tell about Boombox. Shows are promoted by only word of mouth and social media.

A day before the shows, they send out an email to patrons disclosing their location. The space operates in a "grey zone," Lowen and Romero say.

"The city's role with Boombox and spaces like it should be just not shutting it down," Romero said.

"It was actually really exciting to know that a community is actually organizing itself around these things," Henselmann said.

"The question then for us becomes how do we best work with a community to make sure that, in the future, we can actually enable these things to happen."

For dancers like Martin, spaces like Boombox are an integral part of the city and of the arts community.

"Dance should exist anywhere and everywhere," he said. "We have to kind of get behind these types of initiatives."