Bone Broth: Why an ancient soup is making a big comeback

Vancouver-based Pure Bone Broth is one of the participants at the B.C. Wellness Show 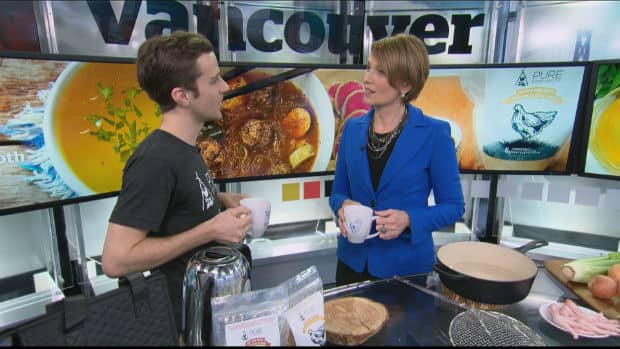 Bone broth is a big deal

Conner Meakin always liked to cook. He's an ultra-marathoner and nutrition is very important to him.

But after suffering a running injury and being worn down to a point he couldn't compete — Meakin sought help through nutrition.

"I started looking online at more traditional eastern ways of healing the body and bone broth was one of the things that I found," he said.

Meakin ran with the bone broth treatment. Now, he specializes in the dish through his company Pure Bone Broth.

While many people try to tap into the broth due to its health properties, Meakin says the popularity also comes from the lack of waste.

"We're going back to our roots as a society. A lot of us who are younger are more interested in conscious consumerism, and as a result we're kind of eating nose to tail — that's a movement where you don't waste any of the animal and you try to get the most bang for your buck out of everything."

Bone broth differs from soup in the time it takes to cook and the ingredients used. To make it, simply boil the bones for a long time — up to 20 hours — and use whole vegetables and herbs to enhance the flavour.

Meakin said chicken feet is a useful ingredient to provide the health packed gelatin you need from collagen.

His company Pure Bone Broth now employs several people and is going to expand its sales to Eastern Canada. He's showcasing his broth at the B.C. Wellness Show this weekend.

Click here to watch Meakin's conversation with Gloria Macarenko and learn some more tips on how to produce your own broth.

With files from CBC's Our Vancouver