A Rogers Wireless customer who lives near the B.C.-Washington border is upset about being overcharged more than $400 in U.S. "roaming" charges — for calls and texts her family made while at home in Canada. 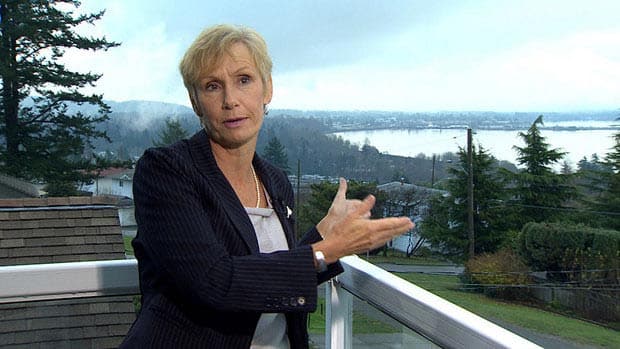 A Rogers Wireless customer who lives near the B.C.-Washington border is upset about being overcharged more than $400 in U.S. "roaming" charges — for calls and texts her family made while at home in Canada.

"It has literally been a nightmare dealing with this," said Jane Goundrey, of White Rock, B.C. "We've roamed inside our house at least 75, 80 per cent of the time."

Goundrey said that on her street the Rogers signal can’t compete with the powerful signal from AT&T in Washington. As a result, her family’s phones automatically switch to the U.S. network.

"The only way a Rogers customer gets coverage here is to roam into the States. Why don’t they just admit that up front?" Goundrey asked.

She said the root of the problem is that her neighbourhood doesn’t get adequate service from Rogers.

"Their first advice is ‘just turn your roaming off.’ And I say when I turn my roaming off I do not have any cellphone coverage," said Goundrey. "Rogers does not have a cell tower here that does work."

"Network signal overlaps can happen near the U.S. border. It’s an industry-wide challenge and unfortunately it can affect our customers too," said Holland.

"In terms of White Rock, we do have a number of cell sites … and we are looking at other sites to improve our service in that area to cut down on accidental roaming."

Critics say many Canadians living along the border are frustrated by domestic wireless carriers who do not invest enough in cell towers.

"Unfortunately for consumers, there isn’t a whole lot of economic incentive for the telecom companies to fix this once and for all," said industry analyst Carmi Levy.

"Every time a mistake is made [a bill for accidental roaming], if a consumer doesn’t raise a flag or doesn’t raise the antenna then that’s additional revenue for these companies."

Goundrey said her main complaint is that she had to spend countless hours inspecting her bills and trying to get Rogers to reverse the bogus charges.

"We’ve had at least 21 conversations with them in the three years since my daughter and I joined with my husband on this family plan," said Goundrey. "The way they do the billing is so complicated that you would need to put your life aside and just look at your bills to deal with it."

Rogers did eventually refund Goundrey $400 for charges incurred this fall. However, she said she had to start from scratch every time she called — with a new customer services representative — which was incredibly frustrating.

"I’ve been on hold for 10 to 15 minutes talking to a ‘tier one’ person with them fighting or even refusing to let me talk to a manager one level up," said Goundrey.

Some of her neighbours also reported they have to call Rogers repeatedly to get the incorrect charges cancelled.

"I have this problem with Rogers on my BlackBerry," White Rock resident Kirk Mitchell said in an email. "The contract termination costs with Rogers are very costly — so I just resign to do quarterly venting to customer service."

"Roaming" in Canada has also been reported as a chronic headache for customers with various providers in Windsor, Ont., across the river from Detroit.

"We live in a long thin band along the U.S. border," said Levy. "Really the only solution to this is to ensure that the Canadian network always prevails over the American one. To do that you would have to have more cell towers with more powerful equipment."

He points out that some of the obstacles to fixing the problem are beyond the telecom industry’s control, such as government limits on signal strength and protests over new cell towers.

"This is an area where both Canadian and American carriers have to get together and come up with a solution that works for everyone because the status quo is completely unacceptable."

In a recent survey by the Public Interest Advocacy Centre in Ottawa, 89 per cent of responders said they had been charged too much for roaming while away from home.

PIAC wants the CRTC to crack down on telecom companies, suggesting all roaming charges be capped, with limits chosen by users. The regulator is holding hearings early next year, where prices for cell usage will be on the agenda.

In the meantime, Rogers said it is working to cut down on customer frustration.

"If ‘accidental roaming’ does occur within Canada, we automatically re-rate voice calls so they don’t show up on a customer’s bill," said Rogers spokeswoman Holland.

"For texts and data, we adjust the invoice. We realize that’s not an ideal experience for our customers and we’re working on ways to also automatically re-rate accidental roaming charges for text and data."

Jane Goundrey’s three-year contract with Rogers recently expired. She has just switched to Bell, which piggybacks on the Telus cell tower network in the White Rock area.

So far, she said, her family has seen a big improvement.

"I have coverage at home. I can make phone calls," she said. Until the problem in her neighborhood is fixed, she thinks Rogers should warn customers up front, before they sign up for three years.

"You are stuck with it — and they aren’t honest when you sign up with what you are getting yourself into," she said.