'Double what you make': Binners pleased with bottle deposit hike

The industry that creates beverages sold in single-use plastic and glass bottles says it's going to increase what it charges consumers to keep those containers out of landfills and oceans.

Return-It will raise deposit on single-use beverage containers from 5 to 10 cents on Nov. 1

The industry that creates beverages sold in single-use plastic and glass bottles says it's going to increase what it charges consumers to keep those containers out of landfills and oceans.

Starting Nov. 1, Encorp Pacific — the industry-owned, not-for-profit organization that recycles single-use plastic and glass bottles and containers — will double its deposit value for bottles up to one litre in size bought at B.C. grocery stores. The deposit will increase to 10 cents per bottle from five cents.

"Raising the deposit value will provide additional incentive for consumers to return their beverage containers," said Allen Langdon, president and CEO of the organization better known as Return-It.

Consumers will still be able to redeem their full 10-cent deposit refund on these containers at Return-It depots and retail locations provincewide, according to a news release.

The organization says the move will affect the price of about 80 per cent of all ready-to-drink beverages such as soft drinks, juice, water, energy and sport drinks in bottles and containers that are up to and including one litre in size.

The deposit rate increase will not apply to alcoholic beverage containers.

Watch how the deposit increase will benefit people making their living collecting cans and bottles: 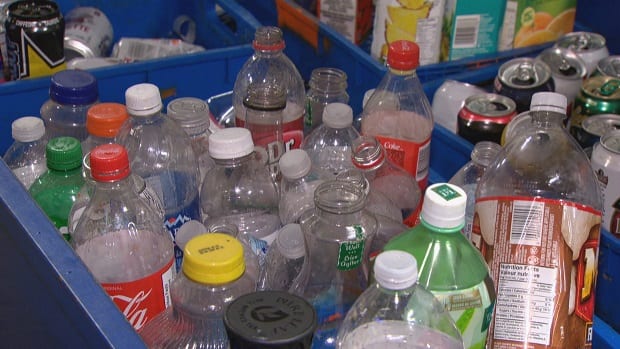 Container deposits going up in B.C.

1 year agoVideo
1:00
Starting Nov. 1 in B.C., deposits on non-alcoholic drink containers under a litre in volume are doubling from 5 cents to 10 cents, meaning a big raise for people who earn a living collecting cans and bottles. 1:00

Dwayne Flohr is a member of the Binners' Project, which is made up of people who pick through waste to collect redeemable containers and other items.

"I wish it was November 1 already," said Flohr, who planned to tell his fellow binners about the deposit increase at a Thursday meeting.

"Means a lot more money. Means you double pretty much what you make. I had a whole load of pop cans today and made $14. That would have been 28 bucks. So that's you know, it's gonna be awesome."

In September, the B.C. Ministry of Environment and Climate Change Strategy launched a consultation on developing its Clean B.C. Plastics Action Plan.

As part of this consultation process, the government said it is considering a unified deposit rate of 10 cents on all beverage containers to increase recovery and reduce consumer and retailer confusion.

Return-It is owned by beverage companies in British Columbia. It's a not-for-profit, product stewardship agency, with beverage container management as its core business.

It recycles approximately 1 billion beverage containers a year in B.C. and Alberta, which are used to make new plastic bottles.