Custom-made carts for bottle pickers coming to Vancouver this spring

'Binners' say finding appropriate carts to collect bottles and cans is one of their biggest challenges -- this pilot project aims to change that.

Davin Boutang is pushing a bright green cart through the urine-soaked alleys of Vancouver's Gastown neighbourhood, looking for refundable cans and bottles.

The cart has been custom-designed for people like him — so-called "binners."

"The challenges I have with binning is, of course, the bad days where I don't find that much," Boutang, 42, said.

"The other challenge is finding a shopping cart."

The Binners' Project, a non-profit organization that supports people like Boutang, says its members have been asking for better access to carts since the organization was founded in 2014.

Boutang's green cart is the prototype of a pilot project. The organization is currently gathering feedback from its members and hopes to have 20 to 30 of them available by spring. 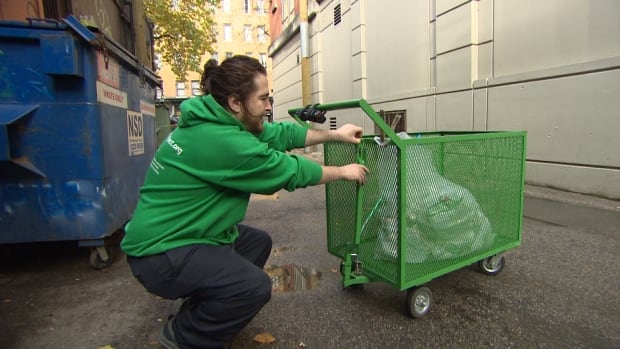 2 years ago
1:02
Binner Davin Boutang describes the features of the new cart. 1:02

Binners use shopping carts to return bottles and cans to a depot. But shopping carts aren't meant for street life — they're noisy and they often break down.

They also aren't supposed to leave the grocery store parking lot. Some industry experts estimate the costs for stolen and lost shopping carts to be about $15,000 per store, per year on average.

The City of Vancouver says it found 522 abandoned shopping carts last year. It says about 75 per cent are returned to the stores, while the remaining 25 per cent are too damaged.

The Binner Project carts are meant to help people like Boutang do their work. The organization also hopes the customized carts will lend more dignity to the binners' daily routines.

"I'm hoping that having one universal cart where everyone knows that this represents a living and a service that we're providing for the city," Boutang said.

"It actually makes me feel like a valued member of society again."

Encorp, the organization that leads the B.C. beverage recycling program, is one of several funders for the customized carts.

It says professional bottle pickers play a large part in increasing the return rate in large urban centres — although it doesn't keep statistics on who returns containers.

Other sponsors include the City of Vancouver, which contributed $75,000 last fall, Vancity Credit Union, and the Downtown Vancouver Business Improvement Association.

Grocery stores Sobeys and Save on Foods have also contributed.

The Binners' Project estimates the carts will cost about $600 to $800 per unit. Regular, mass produced carts cost about $200 a piece, but the organization says the price for these is higher because of the custom design and the relatively small batch.

United We Can, a non-profit recycling depot that also supports binners, tried piloting a cart program four years ago. But board member Bing Smith says the project ultimately failed because the carts were smaller than regular shopping carts and not sturdy enough for the streets.

One major cost and challenge for the project will be the docking stations where the carts will be kept, like a bike share program.

Binners don't often have access to traditional means of securing a deposit, like credit cards or even cell phones.

For now, the Binners' Project is planning to provide access to the docking stations to 100 or so trusted binners that it regularly works with. Giving other binners access in the long-term is still in the works.

Boutang is one of the people testing the prototype. So far it has saved him a lot a time.

He used to keep his own carts, but they were often stolen. If he's not using the prototype, he walks 30 minutes to a recycling depot to look for carts left behind by other binners.

On average, Boutang makes anywhere between $20 and $60 dollars a day as a binner. Having a cart, especially one he could attach to a bike, helps him increase his earnings.

"One of the things people should know about binners is we're all human beings ... that are trying to make a living," Boutang said.

"We're quite proud to be binners in Vancouver."