A Vancouver cyclist is outraged after finding a notice on her bike telling her she could not use a downtown bike rack. 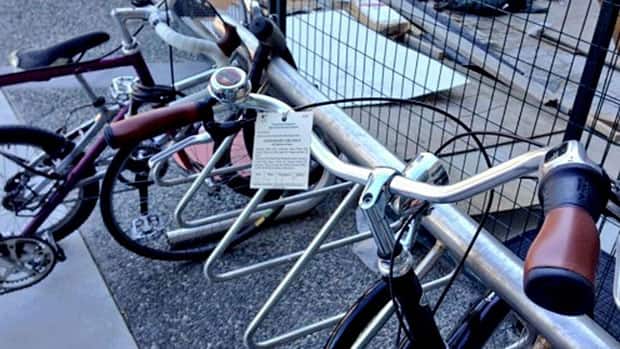 A Vancouver cyclist is outraged after finding a notice on her bike telling her she could not use a downtown bike rack.

Molly Millar says she wasn't expecting a notice when she parked her bike outside the Granville Street office tower before heading into work.

"At the end of the day I noticed I had a ticket on my bike and the ticket said that it was 15-minute parking only and if I did it again they would confiscate my bike," said Millar.

There was no sign indicating the 15-minute rule. Still Millar emailed the building managers asking them to put in a couple of bike racks for employees.

The building's owner Cadillac Fairview responded with an email.

"We do like to encourage cycling to work and our tenants to think about being 'green'...but we also need to maintain the professional image of the building," said the response from the property company.

The company also says the bike rack is for couriers and it does provide all-day parking for office workers in a bikeroom for a nominal annual fee.

But Millar, who is the cycling fashion editor for Momentum Magazine, was still not pleased with the tone of the response.

"I was crazy angry, I am a professional. I cycle. I do not take away from the professional image of the building," said Millar.

Cycling advocate Richard Campbell of the B.C. Bike Coalition says when it comes to being professional it's unlikely that bikes would harm any building's image these days.

"You don't see people complaining about kind of dull looking cars blocking the view of their business," he said.

Campbell says while there are 1,468 bike racks in the city, the majority are concentrated in the downtown core, leaving a shortage of bike racks in other parts.

"There's still many places in the city where it's really difficult or dangerous to get to by bicycle, so there's still a lot of work that needs to be done,"  says Campbell.

The City of Vancouver agrees, and is trying to encourage cycling by launching a bike share program next year and expanding its bike lane network through the city.

Millar received a huge response when she posted her parking notice on Twitter, igniting a debate over how bike-friendly Vancouver truly is, but she says she is still not done fighting for the right to lock up her bike.

"There`s always more that could be done. I just want Vancouver to get to a place where we're accepted."