Bee researcher Mark Winston applauds recent efforts in B.C. to lessen pesticide use and plant bee -friendly flowers but said its agriculture itself that needs to change. 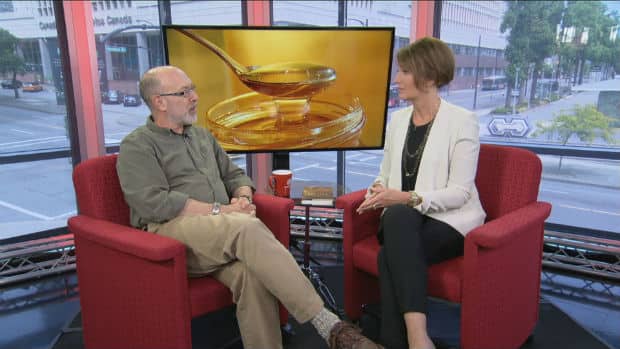 How are B.C. bees doing?

4 years agoVideo
5:44
Author and researcher Mark Winston talks about his love for bees 5:44

It turns out bees aren't actually that busy. But when the hive insects do work they do so with such coordinated efficiency that they accomplish a lot.

That's one reason why Mark Winston, author of Bee Time: Lessons from the Hive is so besotted by the insects.

And he's thrilled the B.C. government recently declared an official "Day of the Bee" in the province last month on May 29.

Winston is a former bee-keeper who's spent four decades studying bees. He's now a senior fellow at Simon Fraser University and spends a lot of time with humans instead at the school's Centre for Dialogue.

He is concerned because bee populations around the world are in rapid decline. Pesticide use, land use changes that restrict wild flowers, and diseases all are taking their toll, he said.

However Winston said Vancouver and other urban centres in this province are promoting healthy bee populations because of the lack of pesticides and the amount of flowers everywhere.

"Cities are fabulous for backyard gardens and road right-of-ways and empty lots, and so bees have the things they need to eat and they're not  being harmed by toxic chemicals. They are real havens for bees."

Winston believes the biggest change has to be in the agricultural sector with a general reduction in the use of heavy chemicals.

"Bees are the canary in the mine for a lot of issues in agriculture that we only are just beginning to address. The heavy chemical input, high fertilizer, mass agriculture, large mono crop acreages that characterize North American agriculture are really what are doing bees in," he said.

In the video above Mark Winston tells host Gloria Macarenko on Our Vancouver how to help honey bee and wild bee populations.