A Maple Ridge, B.C., resident caught an unusual sight on video this week — a bear standing on its hind legs breaking into a pickup truck.

Smarter than average bear opens vehicle doors and gets inside 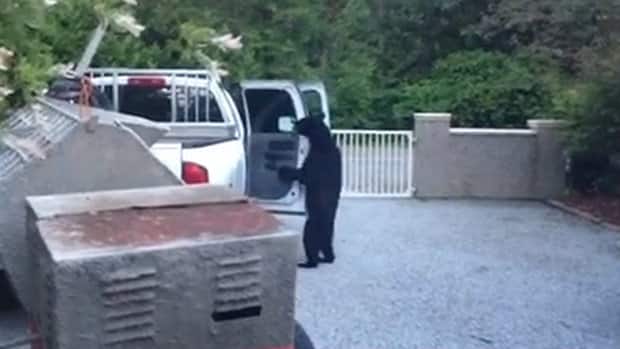 A Maple Ridge, B.C., resident caught an unusual sight on video this week — a bear standing on its hind legs breaking into a pickup truck.

Rebecca Moore, who took the video and posted it to YouTube on Tuesday, says she and her husband were awakened by a noise outside at about 5:30 a.m.

"By the time we got out of bed, [the bear] was actually inside one of our cars. We saw the car door open and it was just coming out one of our cars," she said.

"We saw him just open the door of the truck, just easy as anything.… He was obviously used to accessing vehicles."

Moore said she just had to capture the "unbelievable" sight on camera.

"It was just the amazement, really. You just couldn't believe what you were seeing," she said. "It was just too amazing not to take a video."

Moore says she and her husband chased the bear away from the property as soon as they stopped filming.

Conservation officer Denny Chretien believes the three-year-old bear has broken into other cars in the area.

"It's not a common behaviour but it is occurring."

Chretien says conservation officers have received four calls about bears breaking into cars, including one involving a Porsche.

He advises residents not to leave food or lock up garbage in their cars.

"They don't have the container, so they'll go put in in the vehicle and shut the door and bears will just go, 'What is this?' and it's just a bigger container," he said.

"They'll give it a test and there's so much things to grip on to in a vehicle and they just start ripping."

The Moores, meanwhile, say they're just glad they didn't leave the keys in the ignition.