Hundreds of people have been relocated from the region in the northwest of the province.

More than two dozen buildings have been destroyed by a growing wildfire near a remote community in northern B.C.

On Tuesday, Chief Rick McLean from the Tahltan Nation said 27 structures have been lost in Telegraph Creek.

Several large fires have forced evacuation orders around the community over the past several days.

Hundreds of people — including locals, firefighters and seasonal sockeye fishermen — have left the area.

The B.C. Wildfire Service confirmed some buildings had burned down near Telegraph Creek earlier Tuesday. Officials neither elaborated on whether they were family homes, nor provided an exact number.

'Roaring down the river'

Annita McPhee left the Telegraph Creek area with her 11-year-old daughter over the weekend, and heard later from three people she knows who stayed behind to fight the flames.

She says the trio stayed as long as they could on Monday, aiming sprinklers at buildings in an attempt to save them, then fleeing by boat down the Stikine River once they started choking on the smoke.

"The fire was roaring down the river," McPhee said. "They said it was one scary ride." 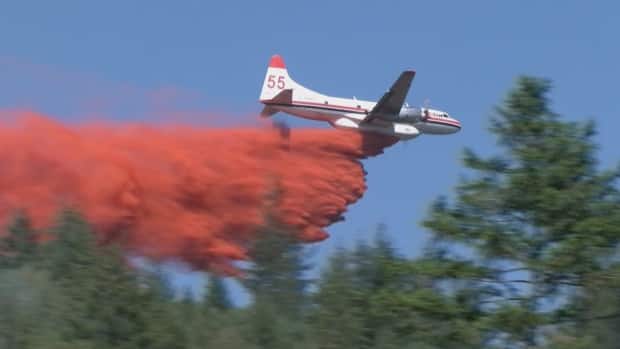 'It's the worst feeling'

Meranda Creyke lives in Prince George, but her family home is in Telegraph Creek. Creyke's mother, father, brother and sister are in Dease Lake, but no one knows if their house is safe.

"It's the worst feeling at this moment not knowing [what's going to happen] and being away from home."

McPhee and Creyke both said they've heard of at least four homes being destroyed by fire.

The Alkali Lake fire, which is currently 78 square kilometres in size, is one of nine burning together in northwestern B.C.

Spokesperson Kyla Fraser with the B.C. Wildfire Service said that blaze is the most concerning in the province as of Tuesday.

Highway 51 remains closed from Dease Lake to Telegraph Creek Road due to the fires.

In the southern half of the province, a growing wildfire west of Nanaimo prompted evacuations and a local state of emergency on Monday night.

The regional district issued the orders after the Nanaimo Lakes wildfire more than doubled in size in just a few hours.

People living in several homes west of the 1.6-square-kilometre blaze were ordered to leave. Another 77 homes are on evacuation alert.

Smoke from wildfires is affecting air quality in some areas of the province.

Quesnel and Williams Lake both have a "very high" health risk rating according to Environment Canada.

"Primarily, this smoke that we're seeing [Tuesday] morning is coming from the Cariboo area and the Chilcotin plateau," said Matt Macdonald, a meteorologist with the agency.

"This ridge of high pressure ... that ridge really just keeps all the smoke confined to the valleys."

For the latest wildfire information, visit:

With files from Yvette Brend, Chantelle Bellrichard and Daybreak Kamloops