B.C. Premier John Horgan cancelled a news conference planned for Tuesday afternoon, following his government's speech from the throne, because of demonstrations outside the legislature.

B.C. Premier John Horgan cancelled a news conference planned for Tuesday afternoon, following his government's speech from the throne, because of demonstrations outside the legislature.

Dozens of people supporting hereditary leaders of the Wet'suwet'en First Nation in their fight against a natural gas pipeline blocked all entrances and exits to the legislature in Victoria, disrupting the start of the spring session hours before it even began.

Horgan said British Columbians have the right to protest peacefully, but that he also understands the frustrations of people who weren't able to access their offices inside government building.

"These events show us why meaningful reconciliation with Indigenous peoples is our shared responsibility and is critical to our province and our country," Horgan said in a statement, noting that reconciliation is "hard work."

Victoria police say they're investigating reports that suggest some government staffers were assaulted and injured during the demonstration, and they've asked any witnesses or alleged victims to speak to investigators.

A senior staff member in the premier's office told CBC News that a handful of employees reported being assaulted as they tried to make their way into the building. One woman was allegedly elbowed in the face, causing a nosebleed, and another was allegedly spit on.

Early Tuesday, demonstrators stopped MLAs, staffers and reporters at every ground-level entrance and exit to the building, chanting and shouting "shame" as they tried to enter.

One reporter ultimately climbed the side of the stone steps to get indoors; other workers already inside were asked to stay put due to security concerns. The formal marble halls were filled with the smell of smoke drifting from a covered fire outside.

After several hours, Victoria police warned they would make arrests if people continued to be blocked from entering the buildings.

It was a scene far from the usual pomp and ceremony on the day of the throne speech. It took until late in the afternoon, around 4:30 p.m. PT, before the demonstration began to dissipate.

Protesters, led by Indigenous young people, camped out at the front of the legislature for days in support of Wet'suwet'en hereditary leaders and their fight against the Coastal GasLink pipeline, which is set to run through the heart of the nation's traditional territory in northern B.C. Some supporters have been sleeping at the legislature for nearly a week.

The lieutenant governor usually arrives to much fanfare on the front steps of the legislature for the throne speech before the premier escorts her indoors. On Tuesday, due to the protest, Lt.-Gov. Janet Austin was scheduled to meet Horgan inside before delivering the address.

It was not clear how or when Austin entered the building, given the blockade, but she was inside by the time ceremonies began in the early afternoon. 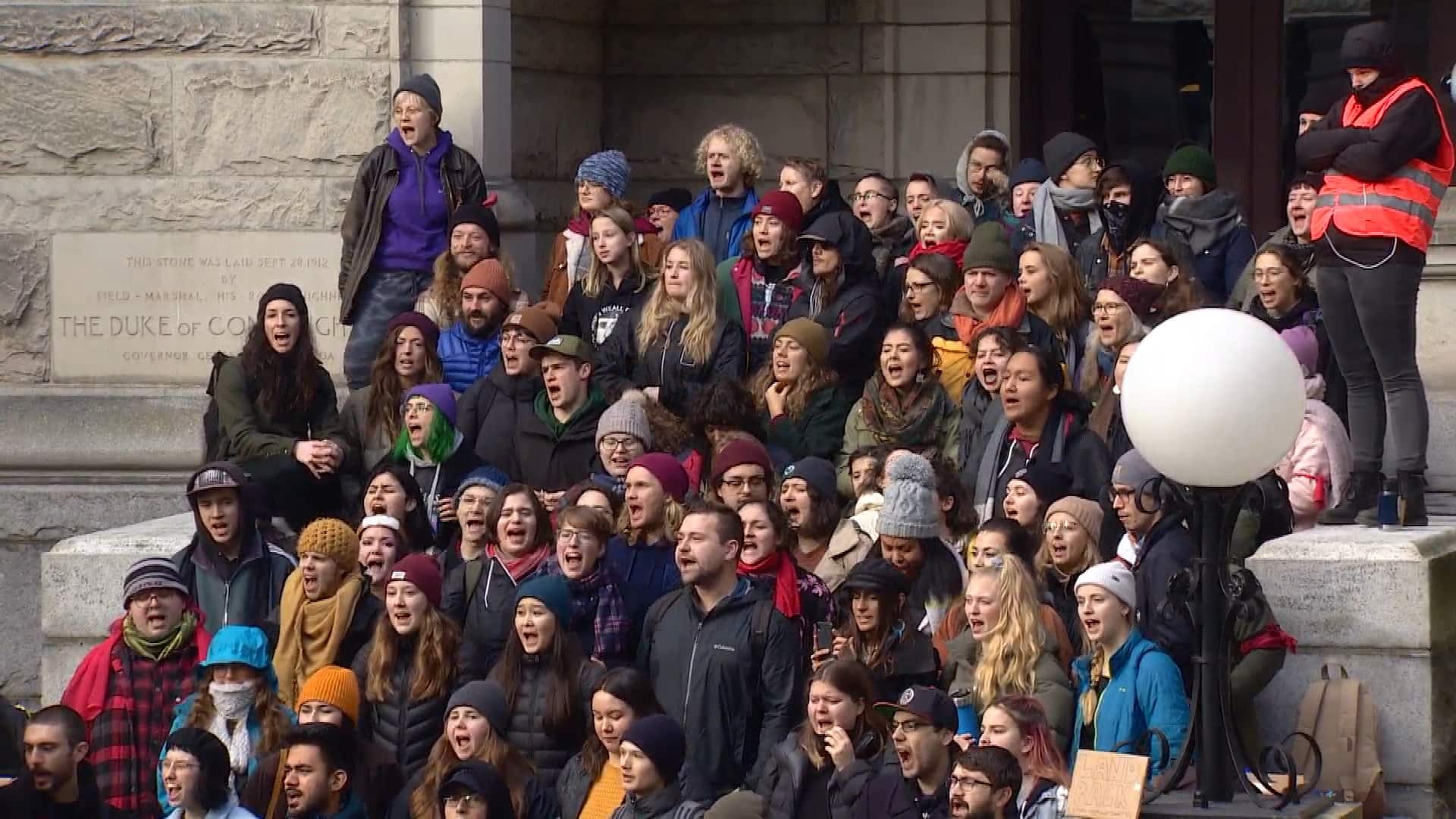 11 months agoVideo
0:30
A crowd of demonstrators supporting Indigenous hereditary leaders and their fight against a natural gas pipeline disrupted the kickoff of the legislature's spring session. 0:30

Just after 2 p.m., Austin rose to deliver the speech from the throne, beginning with an acknowledgement of the victims in the Jan. 8 crash of Ukraine International Airlines Flight PS752.

The speech highlighted some of the NDP government's accomplishments so far, including new primary health-care centres and construction of affordable housing.

The government is promising new funding supplements for children and youth in care, and the expansion of commuter service into the Fraser Valley.

A traditional military salute and honour guard typically marking the lieutenant governor's arrival at the legislature was cancelled. The prorogation ceremony — the beginning of the day's events, officially ending the previous session before the new one begins — was also postponed.

Public Safety Minister Mike Farnworth was inside the legislature ahead of the demonstration Tuesday and said staff are "continuing the day's work."

"I think right now, what the protesters are trying to do is get their point across, and the point of that is obviously trying to obstruct the proceedings and the work in this building," Farnworth said from the hall, as the sound of chanting and singing outside overwhelmed the corridor's usual hush.

Horgan has previously said the Coastal GasLink pipeline is of vital economic and social importance to northern B.C. He said the courts have decided the pipeline can proceed and the rule of law must prevail.

But last week's enforcement of a court injunction by RCMP to remove the hereditary chiefs' supporters from a pipeline access route south of Houston, B.C., has led to protests across Canada.

Horgan's government came to power in 2017 due to an agreement with Green Party MLAs, in which the latter said they would support the NDP on matters of confidence and supply.

The government will table its 2020 budget next week.