Questions are again being raised about BC Place's new $563 million retractable roof after buckets were deployed Saturday during the Vancouver Whitecaps game when water dripped on people in the stands.

Buckets were on display during the Vancouver Whitecaps game on Saturday 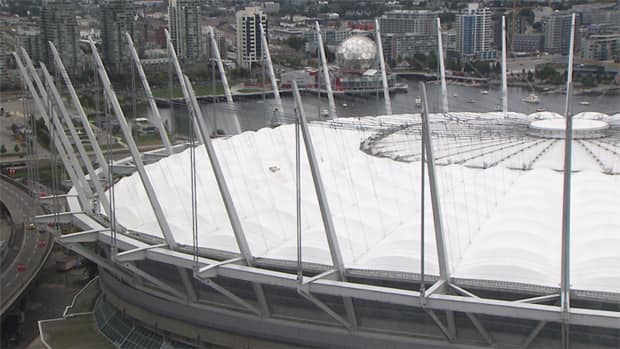 6 years ago
2:01
Some Whitecaps fans had a soggy experience during Saturday's game 2:01

Questions are again being raised about BC Place's new $563 million retractable roof after buckets were deployed Saturday during the Vancouver Whitecaps game when water dripped on people in the stands.

Three years ago the stadium was plagued by small leaks that the B.C. Pavillion Corporation said were to be expected as not all the beams had been sealed. Once they were, PavCo promised, "the stadium would be watertight."

On Saturday fans took to social media to jest about the issue.

Rebecca Bollwitt, who runs the Vancouver website "Miss 604," uploaded a photo to the photo-sharing site, Flickr with the observation, "Either the roof is leaking or @bcplace nominated me for some kind of bucket challenge."

Others quickly joined in.

The Cascadia Cup was on display and a close-up shot of the trophy's large bowl was sent to Flickr with the caption, "Found a better way to catch leaking water @bcplace."

Inconvenienced fans were also given free beer—a shot of which was promptly displayed on Instagram.

In addition to the small opening-day leaks, in Nov 2011 a small leak developed over the 34-yard-line just before the Grey Cup game. It was found to have been caused by a faulty silicone seal and quickly fixed.

PavCo, the crown agency that runs BC Place, told CBC News that work to replace some sections of fabric is ongoing, and that water likely got through some open seams on Saturday.

"Workers are currently in the process of addressing deficiencies with the fixed fabric roof," PavCo said in a statement emailed Monday.

"This remedial work is scheduled to be completed in November. There is no cost to PavCo for this work," PavCo said.