BC Place re-opens after $563M renovation

The newly refurbished BC Place Stadium — soon to be renamed — has offically re-opened in downtown Vancouver. 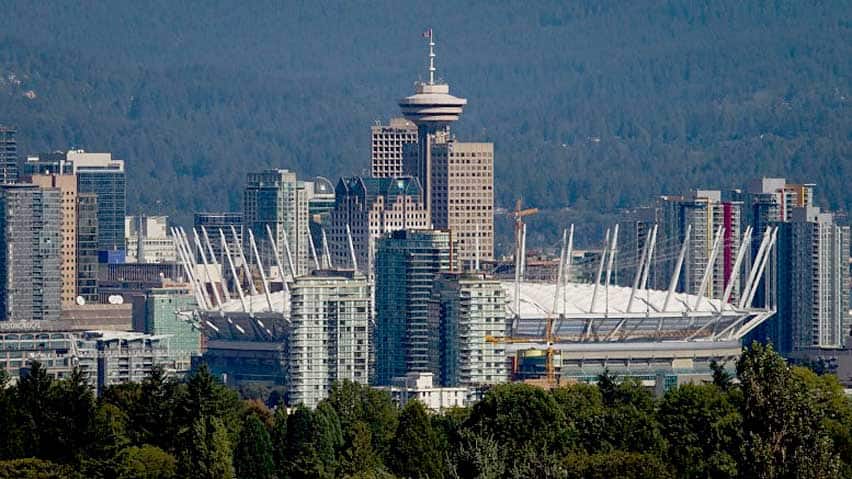 9 years ago
3:02
The revamped BC Place opens for its first official event, reports the CBC’s Alan Waterman 3:02

The newly refurbished BC Place Stadium — soon to be renamed — has offically re-opened in downtown Vancouver.

Officials cut a ceremonial ribbon at 6 p.m. PT, and then stood aside to allow the first of thousands of football fans to enter the stadium and see for themselves the results of the $514-million renovation, including the innovative retractable roof.

The B.C. Lions were alter to kick off against the Edmonton Eskimos in the first game on the new turf in more than a year. The Vancouver Whitecaps soccer club will also call the venue home.

Over 40,000 tickets were sold for the first game at the newly renovated stadium. Sarah McLachlan, the Juno and Grammy award-winning performer, will sing the national anthem prior to the game.

The newly renovated stadium features one of the largest cable-supported retractable roofs in the world, new wider seats, some of the world's largest television screens and windows that turn on a high-tech light show. Specials screens will reduce the seating capacity of the venue during soccer games.

"The promoters didn't want to bring those events into the building because it was hot and stuffy in the summertime, those types of things," said Crosley.

"So now we can open it up and be like an amphitheatre in downtown Vancouver...and we already have interest from a lot of concert promoters that there will be quite a few more concert events in the building," said Crosley.

Officials with BC Place say they expect the renovation will eventually increase revenues by $40-million a year.

But a university professor who has studied stadium construction around the United States says it's unlikely that would be new money for the local economy, but rather consumers shifting their entertainment spending from something else in the region.

Dennis Coates, who is a professor of economics at the University of Maryland, says new stadiums can boost quality of life in a city, but not the economy, and they are rarely a good investment.

"Very few objective observers are going to say yes, this stadium — and you can point to whichever one you'd like — was just a wonderful idea because the city is now revitalized, income growth has shot through the roof. Objective observers never find such results"

BC Place is also expected to be getting a new name from a corporate sponsor, but the new owner of the corporate naming rights has not yet been revealed.