More than 700 people are expected to attend a town hall hosted by the B.C. NDP to discuss Metro Vancouver's "out-of-control real estate market" on Wednesday evening. 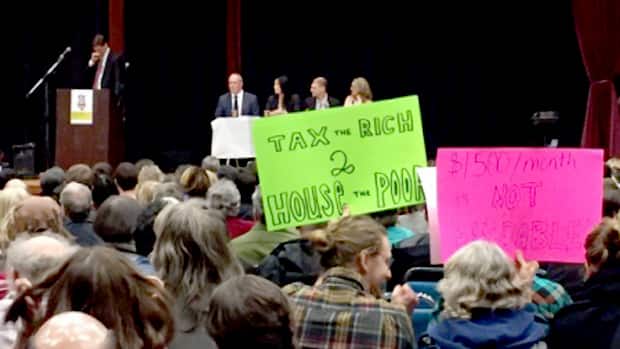 5 years ago
2:07
NDP MLA David Eby's had strong words for the crowd but said the goal of the town hall meeting was to find solutions 2:07

"These are serious issues, this is a major crisis, and we want the provincial government to take it seriously," said NDP MLA David Eby,  who organized it.

The event started with Eby citing a long list of media stories highlighting questionable real estate practices and how housing practices have caused residents to leave the region.

Eby said the region's real estate is governed by "runaway speculation" that is "unpoliced, unregulated and rampant."

He said his party will present two bills at the legislature this week — one of them will close the loopholes around "shadow flipping."

He said the the other bill will be to keep a track record of who is buying homes in B.C., "So that we can ensure that if they're buying homes from offshore, they're paying a higher level tax than those people who are living here today."

Live updates from the meeting

View live updates from the meeting

With files from Kamil Karamali