Complaining about BC Ferries is almost part of the culture along B.C.'s coastal islands and waterways, but constant fare hikes are wearing on the island way of life — and the Union of B.C. Municipalities says it has proof of the economic toll it's taking.

General manager, massage therapist face their own tough decision in the face of rising fares 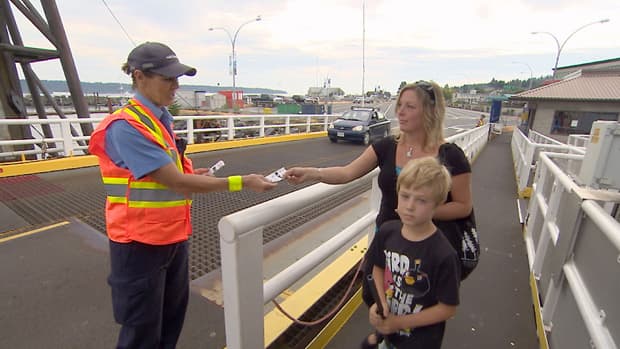 The high cost of riding a B.C. ferry

Complaining about BC Ferries is almost part of the culture along B.C.'s coastal islands and waterways, but constant fare hikes are wearing on the island way of life — and the Union of B.C. Municipalities says it has proof they're taking an economic toll.

On Quadra Island, across Discovery Passage from Vancouver Island, some locals say higher ferry fares are effectively killing the island.

With the fare for a car and driver coming from Vancouver now priced at $220 return, fewer tourists are visiting — and locals say they can't afford the daily commute to work off the island.

Lori Hewett used to be a massage therapist on Quadra. But as her clients slowly started moving off the island, Hewett couldn't afford the commute to see them on Vancouver Island.

So she's joining them — and she's placing the blame squarely on BC Ferries.

"They're squeezing us off our island ... to a bigger community where we don't have to rely on them on a day-to-day basis," she said.

"We have people moving off the islands all the time and they're saying they can't afford that ferry," he told CBC News.

A new report commissioned by the Union of B.C. Municipalities backs up what some island residents have been saying for years.

The paper suggests a clear link between high ferry prices and the decline in coastal communities. According to the report, traffic has dropped by between six and 37 per cent depending on the route over the past decade — and $2.5 billion has vanished from B.C.'s economy.

"We thought it was bad. They told us it was horrible," Abram said.

'Our bridge... just happens to move'

Abram has long been calling for the ferry system to be funded like highways, so all taxpayers share the cost evenly.

"It's no more romantic than somebody telling me that they live in North Vancouver or West Vancouver and they use the Lions Gate Bridge to go to work. That is part of the transportation infrastructure," he said.

"Well, this is our bridge. It just happens to move."

Transportation infrastructure in B.C. is subsidized to varying degrees depending on the location and the service.

A fare on Metro Vancouver 's SkyTrain covers roughly 40 per cent of the cost of the trip, and taxpayers pay the rest.

The Sea-to-Sky Highway, which links Vancouver and Whistler, was recently upgraded at a cost of $800 million. The road isn't tolled, and costs no more to drive than any other highway.

But BC Ferries passengers pay 75 per cent of the operations cost — a far higher percentage than most other transit systems.

BC Ferries CEO Mike Corrigan said fare affordability is a major issue, but BC Ferries has a contract with government as a service provider.

"That contract dictates the number of routes we provide ... and then what the government is willing to pay us to to run that service," he said.

B.C. Minister of Transportation and Infrastructure Todd Stone said some ferries are switching to cheaper fuels like LNG, which should lower costs, and gambling is being tested on some routes as a way to increase revenues.

But he's firm that the taxpayer burden for BC Ferries will not increase.

"There is no more room for additional taxpayer subsidy to BC Ferries," he told CBC News on Friday.

Stone said the UBCM report was "highly simplistic" and flawed, saying it makes assumptions "so massively overstated that you could drive a ferry through them."

But some coastal residents say the report gives them ammunition to push for lower ferry fares, and they'll be watching as politicians tackle the topic at the UBCM convention in Whistler next week.