B.C. warned of potential for 'explosive growth' as 102 new COVID-19 cases from over the weekend announced

B.C. has seen a surge in new COVID-19 infections over the weekend, and officials are warning that the province is at a tipping point in the pandemic.

B.C. has seen a surge in new COVID-19 infections over the weekend, and officials are warning that the province is at a tipping point.

On Monday, Provincial Health Officer Dr. Bonnie Henry presented the latest numbers on the toll the novel coronavirus has taken in British Columbia, along with new modelling that offers a warning about the dangers of slipping up on measures to prevent transmission.

That includes a big spike in new infections over the weekend, with 102 new confirmed cases since Friday afternoon. There have now been 3,300 cases in B.C. since the beginning of the pandemic, of which 253 are still active.

The latest modelling suggests that the numbers of new cases reported daily are rising and could continue to rise over the summer.

"We do have the possibility of having explosive growth here in our outbreak, if we're not careful," Henry said.

WATCH: B.C.'s top doctor says we are experiencing a 'concerning upward bending of our curve' and are 'on the edge that might go up but is in our hands to control' 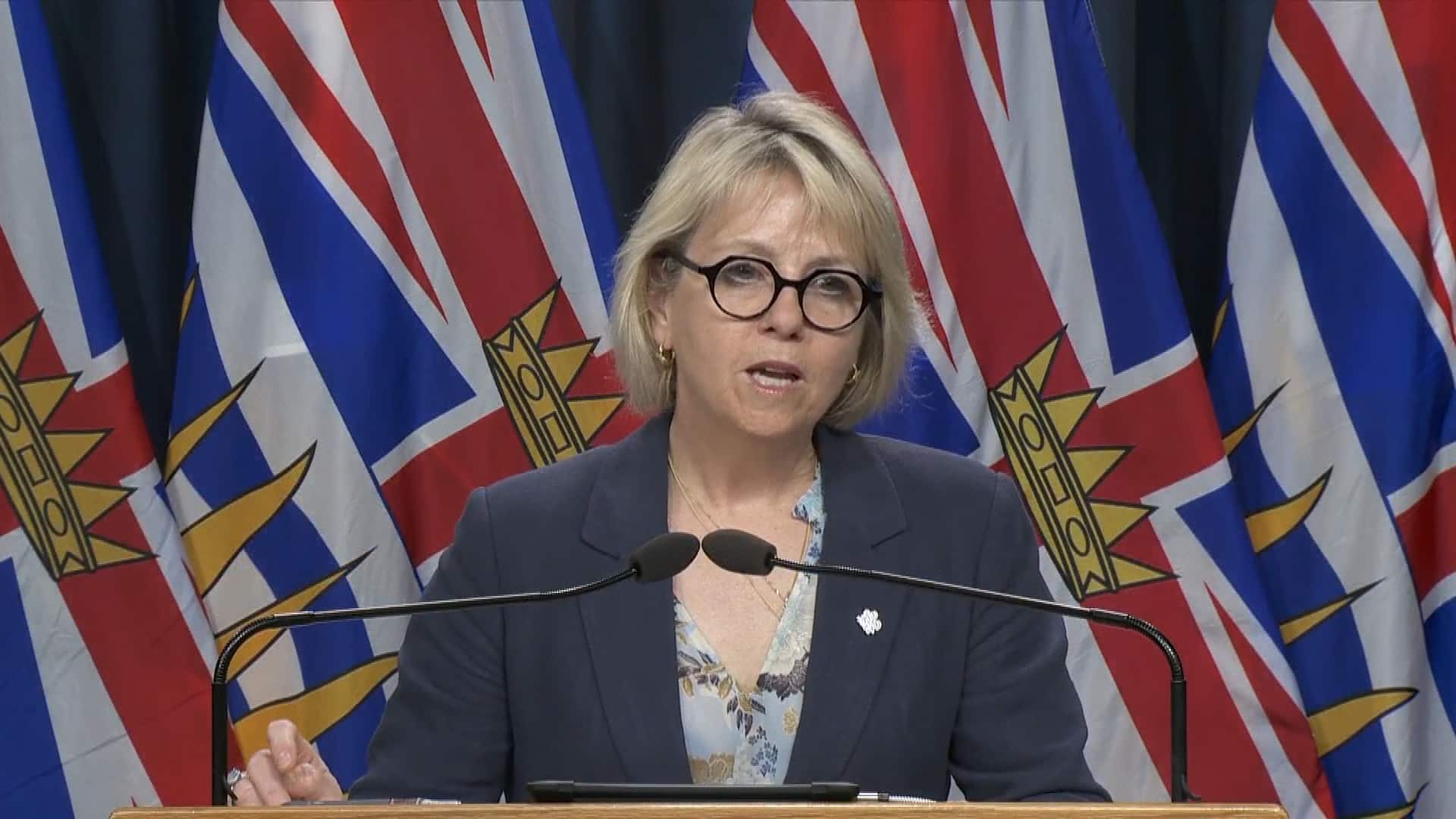 Dr. Bonnie Henry: B.C. is at a turning point with COVID-19

While B.C. has done a good job of flattening the curve of infection so far, she said the province is currently "on the edge" and could see that work undone in the coming weeks.

B.C. Health Minister Adrian Dix noted that while 102 new infections might not be large in comparison with numbers reported in other parts of North America, "it is a lot more than we are comfortable with."

He said that while there have been no deaths since Friday and the hospitalization rate has remained steady, deaths and hospitalizations tend to lag behind new infections.

Dix urged British Columbians to recommit to measures to prevent the spread of COVID-19, particularly keeping groups small and meeting outside whenever possible.

Dix said the number of new cases should serve as "a sobering reminder of how fleeting success can be."

Sixteen people are now in hospital, including four in intensive care. There have been no new deaths recorded since Friday, leaving B.C.'s total at 189 to date.

Henry said she's particularly concerned about the number of new cases that appear to have resulted from parties and larger public gatherings.

That includes 60 cases that have now been linked to multiple exposure events in Kelowna at downtown and waterfront bars and private gatherings around Canada Day. Most new cases confirmed this weekend were people in their 20s and 30s, according to Henry.

"We are starting to see people who are testing positive in the last few days having a large number of contacts again," she said.

"We are no longer having safe interactions."

Henry said that in the spring, most new COVID-19 patients only had close contact with three or four people, but public health officials are now having to trace 20 or 30 contacts for every person with a confirmed case of the disease.

The modelling presented Monday suggests that everyone needs to be cautious about how many other people they are interacting with — if the average person's number of contacts increases to 70 or 80 per cent of normal, the number of infections could rise dramatically.

Currently, the average person's contacts are at about 65 to 70 per cent of normal, which Henry described as concerning.

"We run the risk of a rapid rise," she said.

She said young people need to remember to keep groups small and focus as much as possible on spending time with family. When visiting restaurants, don't try to bend the rules by bringing groups larger than six people or by hopping between tables, Henry added.

Meanwhile, she said public health workers are looking into potential measures that could prevent transmission in situations like get-togethers in vacation home rentals or on houseboats.

As British Columbians expand their social circles and more businesses open up in Phase 3 of the province's pandemic response, the modelling suggests that each new infection is generating an increasing number of additional infections.

In April and May, when the strictest measures were in place, each new COVID-19 patient infected less than one other person. That measure has now risen to more than one new infection from each patient.

Serology tests suggest that fewer than one in 100 people in B.C. have been infected to date, which means the vast majority are still susceptible to infection.

Henry and Dix also presented results from an online survey completed by 394,382 people about the impact of COVID-19.

The results suggest that most people have followed public health advice to wash hands regularly and avoid gatherings, but staying home when sick is still a bit of a sticking point. While 79 per cent of those who responded said they can stay home when they're feeling unwell, only about 67 per cent said they actually stay home.

The biggest problems caused by COVID-19, according to those who answered the survey, include loss of work, concern for vulnerable family members and mental health struggles.

Those between the ages of 18 and 29 were most likely to say their mental health and financial situation have suffered as a result of the pandemic.

Monday's briefing is the first since Henry called an unplanned news conference Friday to announce 28 new cases of the virus, including a baby in neonatal intensive care at St. Paul's Hospital.

Henry said fewer than 10 people were exposed to the virus in the NICU, and the baby was not showing signs of illness. Health-care workers were also exposed, but she said she didn't know how many were involved.

The infants who were exposed at St. Paul's are isolating with their families, according to Henry.

Also on Friday, an alert was issued for potential exposure to COVID-19 at the Sandman hotel on Davie Street in Vancouver between July 7 and July 16.

Another case was discovered in a worker from Alberta at the Site C dam project and a list of potential exposures on flights coming and going from B.C. continues to expand.

With files from Canadian Press, Eva Uguen-Csenge and Roshini Nair