The B.C. government officially outlined its proposals to bring long-term stability to the province's education system, but the B.C. Teachers' Federation is giving the plan a big 'thumbs down'. 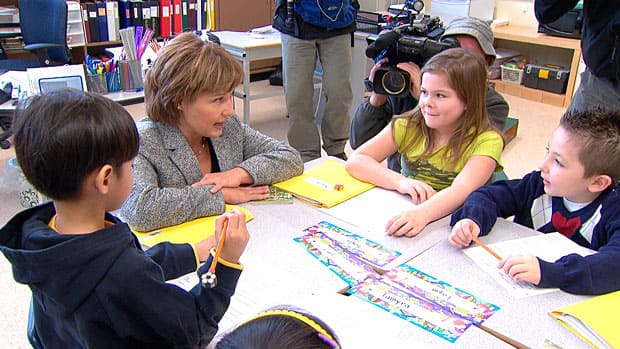 No labour peace with B.C. teachers

8 years ago
2:13
B.C. teachers rejected the premier's proposed 10-year plan soon after it was announced 2:13

The B.C. government officially outlined its proposals to bring long-term stability to the province's education system, but the B.C. Teachers' Federation is giving the plan a big 'thumbs down'.

The B.C. government's proposal says it would allow teachers to go on out on strike and would index teachers' salaries to increases given to nurses, college faculty and other public-sector employees.

As part of the proposal, an education policy council that would include the government, school trustees and the teachers' union would resolve issues such as professional development, and matters of class size and composition.

The contract would also provide $100 million for an education investment fund and allow teachers a say in how the money is used in classrooms.

The announcement comes on the heels of a bitter labour dispute with B.C. teachers.

"This is not a peace offering," Lambert said.

Lambert says that if teachers were to agree, they would lose the right to bargain working conditions, specifically class sizes and the composition of those classes.

The B.C. Court of Appeal ruled in August that administrators can't dictate rules around working conditions for teachers.

Education Minister Don McRae, a former teacher, says labour woes have caused instability for parents and students eight times since 1991. He said it is crucial for all parties to come together to explore the proposed framework.

"We need to work through important questions and issues. It would be unfortunate for B.C. students and families if we allowed misunderstandings to prevent us from exploring any potential path to labour peace," McRae said in a written statement released late Thursday afternoon.

McRae said the BCTF's concerns that the proposed framework ignores court rulings around working conditions is unfounded, as the government's Bill 22 allows for issues around class size and composition to be negotiated.

Officials with the Ministry of Education said that, under the plan, teachers would be able to negotiate issues such as class size, class composition, and compensation as part of the bargaining process; however, as with any other labour agreement, strike action on those issues would not be allowed while the ratified contract was in effect.

Premier Christy Clark's unveiling of the plan Thursday morning was meant to be one in a series of recent 'good news' announcements. Clark said the plan's intent is to create a decade of peace between the teachers' union and the government.

"The goal of a 10-year agreement is simple and ambitious — give Grade 2 students a chance to go their entire school career without a disruption," Clark said.

"Imagine the opportunities for students, parents and teachers in the classroom, knowing classrooms would always be open.

"We need to work closely with teachers on our shared goal of improving B.C.'s education system, and we're prepared to make some fundamental changes that put students first.

"This isn't about the adults — it's about what's best for students," Clark said.

But Lambert calls the Premier's timing bizarre and suspect, given the BC Teachers' Federation and BC Public School Employers' Association are slated to vote on — and expected to ratify —  a new framework agreement this weekend.

"In recent months we’ve quietly had productive conversations with the employer about how to achieve a smoother more effective round, and it’s most unfortunate that government chose to intervene at this time," Lambert said in a written statement.

"The BCTF will continue to recommend ratification of the Framework Agreement and we hope this abrupt announcement from government will not prevent BCPSEA from doing the same."

With files from the CBC's Terry Donnelly, Stephen Smart, Curt Petrovich and The Canadian Press