The B.C. Teachers' Federation will vote next week whether to escalate job action to a full-scale strike, after losing its fight against a 10 per cent pay cut during rotating strikes. 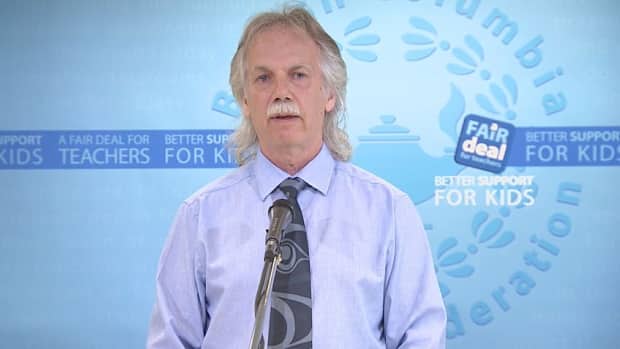 Teachers will vote on a full strike

7 years ago
3:03
Union says teachers will cast their ballot early next week 3:03

The B.C. Teachers' Federation will vote next week whether to escalate job action to a full-scale strike, after losing its fight against a 10 per cent pay cut during rotating strikes.

Union president Jim Iker says teachers will vote Monday and Tuesday on whether to carry out full-scale strikes before the end of the school year.

Iker said that the contract dispute and teachers' one-day rotating strikes around the province have created chaos.

"We want to see an end to that chaos and a fair resolution to this," Iker said at a press conference Wednesday afternoon.

"The time has come to apply even more pressure, to get a fair deal and get better support."

Without more government money on the table, Iker said, field trips will be cancelled and report cards will not be issued because of increasing job action on the part of the province's 41,000 teachers.

Iker said the decision to go to a vote on a full strike was made Tuesday, even before the Labour Relations Board ruled against the union.

B.C. Education Minister Peter Fassbender said he is disappointed with the teachers' plans to escalate to a full walkout.

"A full strike is only going to keep more students out of their classrooms, create more disruption for parents, while teachers and support workers caught in the middle will lose even more in wages," said Fassbender.

"There is no bottomless pit of money and the rotating strikes are certainly not going to help teachers’ and support workers’ pocketbooks."

Meanwhile negotiations continue with the B.C. Public School Employers' Association, the bargaining arm of the government.

In a statement Wednesday, the employers' public administrator Michael Marchbank said the union has less than four weeks to hammer out an agreement.

He said the employers were "prepared to negotiate 24/7 if needed."

"We want this solved by the end of the school year so we can focus on the needs of students in our public education system and ensure that their education is not disrupted further by this labour dispute.

"If not, we are prepared to negotiate all summer so that the next school year is not impacted.”

The union made its announcement shortly after the Labour Relations Board sided with the province in its bid to dock teachers 10 per cent of their pay during the rotating strikes.

The union went to the board over the government's decision to dock teachers' wages in reaction to their job action.

Teachers argued the government's move to reduce their wages needed prior approval from the Labour Relations Board.

But the board ruled Wednesday afternoon that it was siding the B.C. Public School Employers' Association, the bargaining arm for the government.

In his statement, Marchbank ​said he agreed with the decision.

“If people are partially withdrawing their services it is appropriate there should be a partial reduction in their wages," he said.

"We hope the BCTF leadership will now turn their full attention to trying to resolve this labour dispute at the bargaining table."

The board said it agreed with the employers' argument that the reduction in salaries is not part of its lockout activity.

The government announced the pay cut during the first week of the strikes, saying the job action reduced teachers' hours and duties and thus their pay.

The union called the pay cut a punitive action that is only escalating the dispute, but the government insists it's just applying pressure to reach a deal.

Teachers did not mount rotating strikes on Wednesday, but hundreds of students across the province walked out to show their displeasure at being caught in the middle of the dispute.

Earlier this week, the union announced it was reducing its wage demands from a 15.9 per cent increase over four years to roughly 14 per cent over four years, including increases for the cost of living.

The government is offering 7.25 per cent over six years plus a signing bonus.