Groups of students walked out of schools around Metro Vancouver this morning to protest the dispute between teachers and the B.C. government.

The B.C. Student Walkout for Students is a reaction to the dispute between the province and teachers 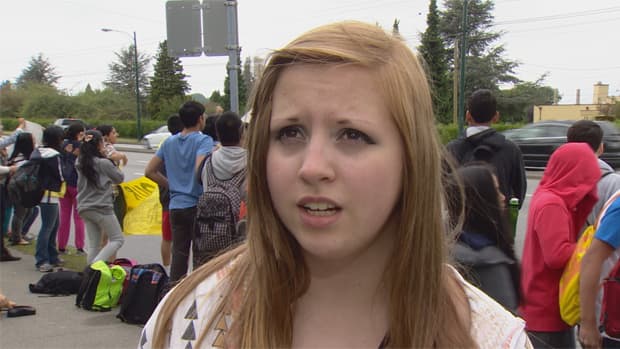 B.C. students walk out of class

Groups of students walked out of schools around Metro Vancouver this morning to protest the dispute between teachers and the B.C. government.

The B.C. Student Walkout for Students began around 9 a.m. PT at many schools, including Argyle Secondary in North Vancouver, Lord Tweedsmuir Secondary in Surrey and Sir John Oliver in Vancouver.

The estimates for the number of students involved ranged from about a dozen at some schools to close to 100 at others.

It remains unclear how many other students at other schools across the province may have also walked out.

The walkout was scheduled for Wednesday because that was the only day this week when the teachers were not staging rotating strike action.

Last week, B.C.'s 41,000 teachers began rotating one-day strikes affecting every district in the province. A partial lockout notice from the government also restricts the time teachers can spend at schools during non-teaching hours.

The North Vancouver School District was one of several that issued letters to parents, advising them students will be marked as absent if they take part in the walkout.

"Unsupervised activities such as walkouts place students at risk and are disruptive to learning and to the school community at large," wrote the school district's superintendent, John Lewis.

"Students who do not report to their scheduled class will be marked as absent and are responsible for any missed work and assignments."

School District 42, covering Maple Ridge and Pitt Meadows, have also sent out a letter warning parents that walkouts are not sanctioned by the school or district.

"We strongly encourage students not to participate in the walkout, both to ensure their own safety and to avoid adding further unnecessary and unproductive disruptions to their learning during this already difficult dispute."

The Vancouver School Board has also weighed in.

Public relations manager Kurt Heinrich told the CBC anyone who leaves class will be marked as absent.

"We understand that parents and students are feeling the pressures from this labour disruption and the issues that are ongoing in terms of the provincial bargaining situation," said Heinrich.

"And we would encourage parents if they have any concerns to have a conversation with their child and discuss the issue."

Students 'fed up with dispute'

The B.C. Student Walkout for Students was organized through a Facebook event page hosted by students Victoria Barker and Mackenzie Timko, who have also set up a Twitter feed.

Barker, 18, who attends Lord Tweedsmuir Secondary in Surrey, says her entire academic life has been lived in the shadow of the battle between teachers and government, supposedly in her interest.

"There's just so many of us that are fed up with the dispute," she said. "If they were really doing this for us, then the lockout wouldn't have been imposed and the strikes wouldn't be occurring."

Barker's Facebook event page explains they plan to take action to tell both the B.C. Teachers' Federation (BCTF) and the provincial government that students feel trapped in the middle of the dispute.

"The two sides are like parents who are divorcing and have stuck their children in the middle for the last 13 years," she writes on the Facebook page.

"Each side claims to be 'fighting for the students' yet each side fails to show how they are doing so."

But she's also upset by the B.C. government's partial lockout of teachers, saying they can't get help from instructors at recess or lunch and limited time before and after school.

Meanwhile, the B.C. Labour Relations Board deemed Wedneday afternoon that the government's decision to cut teachers' pay by 10 per cent during the partial lockout was legal.

The BCTF and the B.C. Public School Employers' Association are expected to spend three days at the negotiating table this week. The teachers and the province are divided over wages and class size and composition.

With files from Steve Lus and Tim Weekes