B.C. teachers' strike: How some parents are taking action

Some B.C. parents are donating the government's $40-a-day compensation they expect to receive to the teachers union. Other parents are setting up makeshift schools of their own. 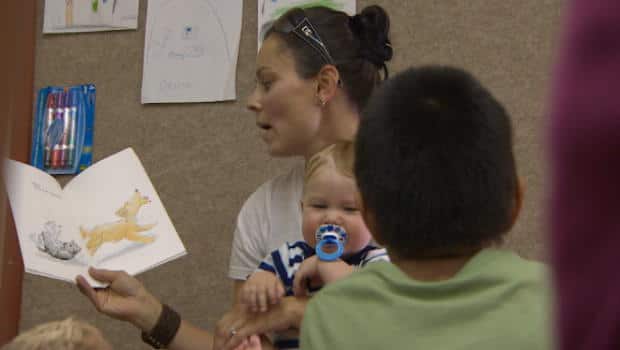 6 years agoVideo
2:17
A group of B.C. parents and community members are teaching a roomful of kids during the province's teachers' strike 2:17

A website set up to raise money for B.C. teachers during the ongoing province-wide strike has collected almost $3,000 in its first three days online.

The site, Families Funding Teachers, was set up by parents who say they are angry with the government's decision to compensate them during the teachers' dispute.

"Parents wishing to re-gift their $40/day bribe money can do so easily here," the site says. "All money goes to the PayPal account of the B.C. Teachers' Federation and will be directed toward their strike fund."

Kate Milberry, an East Vancouver mom with a PhD and a specialty in social media, says she helped create and launch the site on Labour Day after a lively Facebook discussion with her community.

She says she was incensed when she first heard of the government's $40-a-day compensation plan—believing that money should be going directly to teachers and education—and likened the payments to a pressure tactic.

"Receiving money from the government could be something that makes them [caregivers] feel better. It certainly could make their lives easier, and they might be more inclined to turn around and pressure teachers to go back to school," Milberry said.

The site is encouraging anyone and everyone — whether they have school-age children or not — to donate funds to the BCTF, and Milberry says the thousands of dollars that have come in is an encouraging response.

"I think it's compelling because people are in fact fronting this money. People don't have the $40 a day in their pockets. They are advancing it to teachers, and I think that really shows a commitment."

Milberry says the BCTF has assured her the money will go into its strike fund and will be used to help cash-strapped teachers. 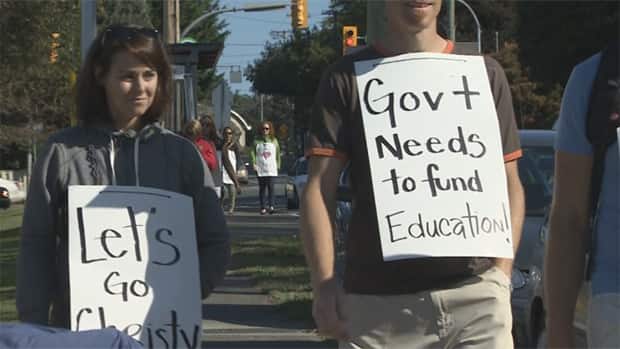 6 years agoVideo
2:50
With no talks scheduled, both sides in the B.C. teachers' contract dispute appear to be getting more entrenched 2:50

​East Vancouver dad Lars Konge decided to make school happen, whether the province and the B.C. teachers' union are involved or not.

He hired a teacher and turned his living room into a classroom for six children, including his daughter who is enrolled to start Grade 2.

"When they do go back to class, I don't want her to be further behind on the curriculum," he said.

Lisa Bell, a mother of four, is one of the fill-in teachers guiding roughly 20 students through classwork in the community centre serving Qualicum Bay and Bowser.

"It's really important to keep their brains going. The kids have been out of school for three months now, and it's time to get back to something that is a little more regular," she told CBC News.

Tiera Hodges, another parent-turned-teacher, said no one participating at the temporary school is attempting to replace B.C.'s professional educators.

"We're not trying to undermine the teachers in any way. We're trying to show the public the kids need this," she said.

Community coaches are stepping up and making sure high school football is able to get underway despite the teachers' strike.

Kris Pechet, one of the directors of the B.C. High School Football Association, says he's received letters of authorization from 37 school administrations and estimates that 75 per cent of B.C.'s high school football teams will be on the field this fall.

Bill Haddow, an English teacher at Hugh Boyd in Richmond, B.C., and a football coach for the last 38 years, says his team sadly won't be joining them.

"My clock has been set for a long time. I am supposed to be on a football field, I know that. It just hurts, it hurts bad, not to be able to work with those guys and give them the opportunities they want," he said.

For the school teams that do continue, they won't be using school property and will hold games on community fields, Pechet said.

"We have asked every coach and programs that do participate not to cross any picket lines," he said. 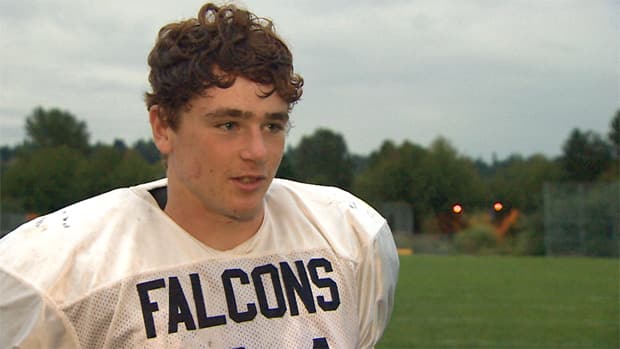 School's out, but the game is on

6 years agoVideo
2:08
B.C. high school football players like Jordon Seney and their coaches are getting creative as the teachers' strike continues 2:08

Are you doing something to take action while school is out?

Share your story with CBC News in the comments below.

With files from the CBC's Steve Lus and Chris Brown