The Surrey Teachers' Association will open a food bank this weekend, after giving out $10,000 in food vouchers to its members in the last week. 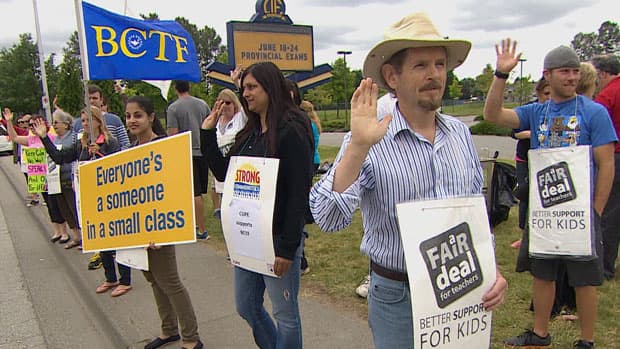 The Surrey Teachers' Association will open a food bank this weekend, after giving out $10,000 in food vouchers to its members in just the last week.

Association president Jennifer Wadge says this will be the second time her organization has opened a food bank.

"We did that also in during the two-week strike that happened in 2005. At that time we had other unions, and members of the community donate food and that was a huge help to a lot of teachers, so we are going to do that again this time," said Wadge.

Teachers are no longer receiving strike pay, because the BCTF strike fund has run out.

Wadge says the food bank will also be open to CUPE support workers who refuse to cross teacher picket lines, and her organization will purchase more gift cards because of high demand.

"Our salaries have been stagnant for the last three years, and I think that has a lot to do with it," said Wadge.

The Vancouver Secondary Teachers' Association is also handing out supermarket gift cards. President Debbie Pawluk says even though the strike is in its infancy, many teachers are already struggling financially.

"One of my colleagues, she's a single mum, she is a widow, she has a young son. Her circumstances are very different than mine. I have grown children and a husband with a full-time job," said Pawluk.

Pawluk says her association gave out $18,000 in financial assistance during the 2005 teachers' strike, and she expects to hand out more this time around.

During the last three weeks of rotating strikes, the teachers had their pay cut by 10 per cent and were not paid on the three days they were taking part in the rotating strikes.

The current full-strike means most could lose an additional two weeks of salary if the dispute is not settled before normal end of the school year at the end of June.

With files from Robert Zimmerman