BCTF and BCPSEA continue to talk with mediator Vince Ready 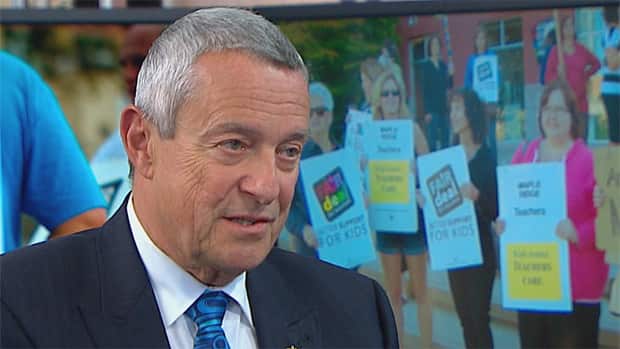 "I do know that Mr. Cameron and Mr. Iker and Mr. Ready are having discussions as we sit here," Fassbender told CBC News host Andrew Chang just after 5 p.m. PT, referring the government's chief negotiator, Peter Cameron, and BCTF president Jim Iker. "The timing of when they're going to actually physically get together, I don't know that."'

Despite Ready's public walk-out after three days of talks at the end of August, Fassbender said Ready "never left the table" and has been trying to get the two parties close enough that he can play a meaningful mediation role.

"My hope has been, continues to be, as does the premier, that we are able to get back at the table to get a mediated settlement, to have the involvement of someone like Vince Ready so we can actually drill down to what are the stumbling blocks in the key issues," Fassbender said.

A vote held yesterday by the B.C. teachers' union came back in favour of going to binding arbitration, but Fassbender and other government representatives made it clear that binding arbitration was not an option they would consider at this time.