A CBC News investigation into violence against nurses at B.C. health facilities has lead provincial officials to immediately improve safety. 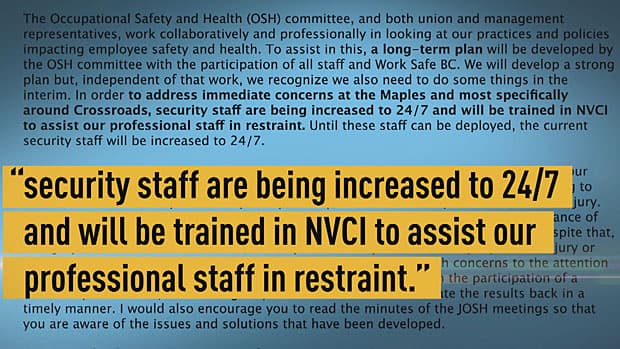 7 years ago
2:24
Changes follow CBC investigation into violence against nurses 2:24

A CBC News investigation into violence against nurses at the Maples Adolescent Treatment Centre in Burnaby, B.C., has prompted provincial officials to immediately improve safety.

Last week, CBC News uncovered a history of occupational health and safety violations, as well as a disturbing list of injuries to staff, on the Crossroads unit at the Maples.

These findings were raised with B.C.'s Minister for Children and Families Stephanie Cadieux, who admitted safety protocols at Maples are inadequate and promised upgrades.

He also outlined some steps that will be taken to keep staff safe in the interim, including hiring security guards trained to assist staff in controlling aggressive patients.

Jewels Bainbridge, a former Maples nurse who was attacked and seriously injured by a patient in 2011, said she is glad she spoke up about her ordeal.

She said hiring security guards will mean staff no longer "have to wear two hats — the mean guy hat and the therapist hat."

"Really when you think about it, can you be therapeutic, if you're acting in that respect, and then the next day you have to take somebody down in a take-down — it has never been an issue that has worked well," said Bainbridge.

"Having security guards there to protect the staff and protect children from other children is a huge leap in the right direction."

The issue of violence against nurses is now on the agenda at the annual B.C. Nurses Union Convention, happening this week in Vancouver.

"Maples is just one stunning example of how really bad it is," said BCNU president Debra McPherson.

McPherson said hiring guards is good, but more needs to be done. She said the small keychain alarms now being issued to staff is not the duress system the union and WorkSafeBC have been recommending. The key chains make noise, but they do not send a signal to a central control centre indicating help is needed.

"A keychain or rape whistle that can be ripped off you so you can't use it is not the same as a panic alarm which you can press a button and know that other people are going to be communicated with and come to your assistance right away," she said.

Nurse suspended for speaking up

Nurses attending the convention are being encouraged to report violence they experience in the workplace. They say doing so, however, could put them at risk of being fired or punished.

For example, CBC News has learned that Hillside Centre in Kamloops has just suspended a nurse who spoke up about violence after another nurse was assaulted by a forensic patient after she told him he couldn't have toast.

"Our member who got the three-day suspension in Hillside, we're going to support that member financially so they don't lose wages for speaking out on something that should be dealt with by this employer," said McPherson.

Interior Health refused to answer any questions about the suspension, saying they do not comment on personnel matters.

The Hillside Centre is in the process of replacing its panic alarm system, which is expected to be done by the end of the year.