B.C. storm: Man escapes car after tree falls on it while he's driving

The fierce storm that closed Vancouver's famous park, disrupted ferry service and cut power to hundreds of thousands of customers also caused a number of incidents as brittle tree boughs snapped and fell on cars.

The incident was one of many caused by dry, brittle trees battered by strong winds 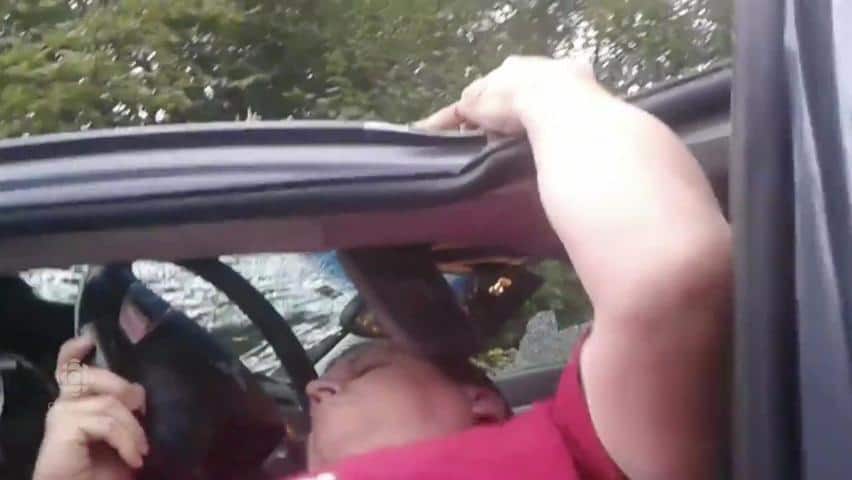 Stuart Ranger was driving along a Metro Vancouver road during the storm that swept across the region on Saturday when he saw it happen — two trees suddenly fell down on two separate cars.

"And then I realized this guy in his car was trapped," said Ranger.

"So we got up there, me and this other guy, and we just ripped the door open and slowly got him out and waited for the paramedics to get there."

It wasn't the only close call on Saturday, when winds of up to 80 km/h brought trees and huge branches crashing down onto power lines and cars.

On Sunday afternoon, Keith and Kristie Walters were out for a walk to survey the damage in their neighbourhood. They can't stay in their home because the damage is so bad.

"There's definitely holes through the roof and some damaged trestles, but we haven't had a real good look yet," said Keith Walters.

In Surrey, a woman in her 40s sustained life-threatening injuries after being struck by a branch while walking with her daughter.

The storm triggered wind warnings from Environment Canada, forced the temporary closure of Vancouver's Stanley Park, and slowed ferry service between Victoria and the mainland.

Earlier on Sunday, the city warned residents to brace for more rain and wind. A rainfall warning was also in effect for the Howe Sound region north of Vancouver, with a possibility of flash floods.

Trees brittle due to drought

The City of Vancouver won't guess how many trees went down in the storm on Saturday, but it does know that there were close to 1,500 calls related to the issue.

"We've seen one of the most extreme droughts that we've ever seen here in the Lower Mainland," said Johnston. "Climate change is impacting cities across the world."

Johnston said that it could be weeks before all the damage is cleaned up, but that the city had managed to clear major intersections of debris.

Brian Quinn, manager of park operations for the City of Vancouver, said the timing of the storm didn't help.

"Typically we receive these kinds of winds in the fall and winter when the trees are defoliated," Quinn said.

Instead, the leaves on the trees made them into giant sails more easily torn out of the ground.

Quinn said city crews will be out inspecting the trees to assess any further risks.

Still in the dark

Up to 500,000 people were without power at the height of Saturday's storm.

Thousands of households, most of them in the Greater Vancouver Area, were still without power as of Sunday evening. BC Hydro said it could take until Monday morning to restore power to some areas of southwestern British Columbia.

Customers without power now down to 157,000 as restoration efforts progress. <a href="https://twitter.com/hashtag/bcstorm?src=hash">#bcstorm</a>

BC Hydro said in a release that crews are addressing public safety issues first and "aim to get power back for highest density areas in order to get as many customers back as possible."

"We're hoping to restore power to the majority of customers by noon Sunday," the utility said.

The cost of the extensive property damage and the bill for cleaning up the huge mess have yet to be tallied.

With files from Richard Zussman, Jeff Harrington, and Canadian Press