Port Metro Vancouver has approved the expansion of a coal facility in North Vancouver and is looking for a new facility to be built in Surrey. 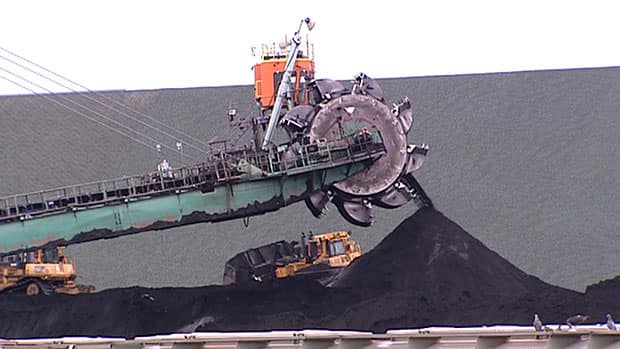 8 years agoVideo
2:21
Mayor Gregor Robertson wants to limit the amount of coal shipped through the region 2:21

Port Metro Vancouver has approved the expansion of a coal facility in North Vancouver and is looking for a new facility to be built in Surrey, but the plans are generating opposition from regional mayors, environmentalists and residents.

The port authority has already approved the expansion of the Neptune Terminals coal facility in North Vancouver, which would more than double its capacity from 8.5 million tonnes annually to 18.5 million.

Meanwhile in Surrey, the port authority is exploring the possibility of approving a new direct transfer coal facility at the Fraser Surrey Docks that would have a capacity of 4 million tonnes. That capacity could increase in the future.

Vancouver mayor Gregor Robertson introduced a motion on Tuesday, aiming to prevent more coal from being transported from the Lower Mainland.

"It's going to quadruple in a number of years so we're looking at eight trains every two days," Baldwin said.

"And each train is about 2.5 kilometres long, which is pretty well the whole length of our waterfront."

Vancouver City council will be hearing from the coal industry on Wednesday.

"We're a little concerned because we think it adds to the cacophony of voices that are actually trying to discredit the industry," said Alan Fryer, spokesman for the Coal Alliance.

The expansion plans would make Port Metro Vancouver the largest exporter of coal in North America.

"Two-thirds of the coal that's exported through Port Metro Vancouver is Canadian steelmaking coal that comes back in things like automobiles and SkyTrain parts, for example," said Wilson.

B.C. Almanac hosted a live chat on this topic today. Our guest was Kevin Washbrook, the Director for Voters Taking Action on Climate Change.

Click below to see a replay of the chat.