B.C. premier concerned about 'catastrophic consequences' regardless of pipeline's owner

B.C. Premier John Horgan says the Trudeau government's decision to buy the Trans Mountain pipeline project for $4.5 billion from Kinder Morgan does not change his concerns about the project's risks.

B.C. Premier John Horgan says the Trudeau government's decision to buy the Trans Mountain pipeline project for $4.5 billion from Kinder Morgan does not change his concerns about the project's risks.

Horgan said he learned of the decision early Tuesday morning when Prime Minister Justin Trudeau called him minutes before the announcement in Ottawa.

"I said to the prime minister that ownership of the project doesn't change my concerns," Horgan told CBC Radio on Tuesday morning.

"I continue to have concerns about the potential adverse consequences of a diluted bitumen spill on our marine environment, on our coast and the consequences to our economy," he said.

Horgan noted, however, that he thinks it will be easier to have his concerns about the project addressed.

"The good news though is that I now know the owner and have his phone number and I can call him with my concerns."

"This unprecedented action taken by the federal government is entirely a consequence of the actions of John Horgan," Wilkinson said in statement on Tuesday morning.

"This is a critical project that should have been built and owned by the private sector. Now, British Columbians and Canadians are left paying for Horgan's historic blunder."

That sentiment was echoed by Iain Black, president of the Greater Vancouver Board of Trade.

"While we are going to save the vital pipeline and the thousands of jobs that come with it, today's decision highlights how much damage has been done to our international reputation."

B.C. Green Party Leader Andrew Weaver was less pleased with the decision, saying, "This is a betrayal by a government who ran on a hopeful vision for a better future."

"A government that promised to end fossil fuel subsidies and to champion the clean economy should not be spending billions of dollars of taxpayer money to buy out a fossil fuel expansion project."

Opposition in B.C. likely to continue

Horgan said the federal decision will not change his plans to contest the exclusive federal jurisdiction surrounding the project in court.

"The reference case will go forward unless I hear something different today [Tuesday]," said Horgan, who does not expect protests against the pipeline to end.

Protesters camped out at the construction site also voiced their intention to continue to fight the project.

"This is the moment in history where Justin Trudeau has revealed that he never cared about Indigenous rights or reconciliation," said Will George, Tsleil-Waututh member and spokesperson for the Coast Salish Watch House.

"The cost that they did not calculate in their $4.5 billion purchase is that Indigenous front lines will stop this pipeline."

The federal government will buy the Trans Mountain pipeline and infrastructure related to the expansion for $4.5 billion to ensure the controversial project proceeds.

"Make no mistake, this is an investment in Canada's future," Morneau said. 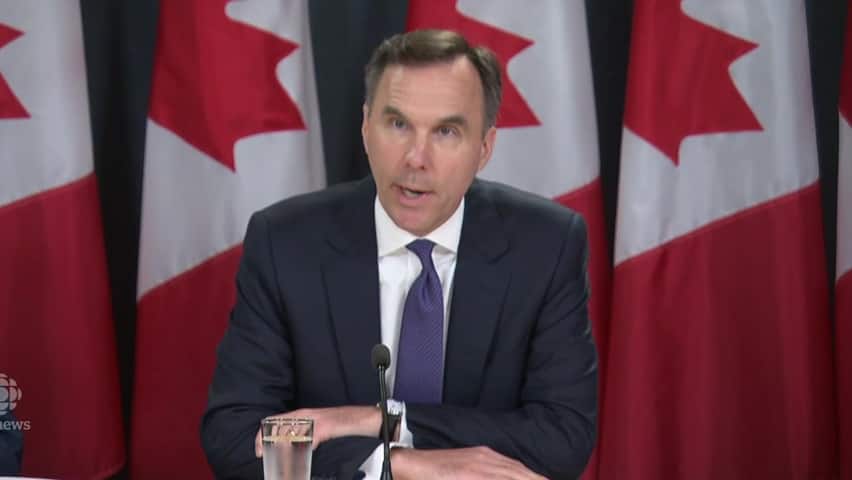 3 years ago
2:21
Finance Minister Bill Morneau explains the reasons behind the government's decision to buy the Trans Mountain pipeline for $4.5 billion. 2:21

He said the government does not intend to be a long-term owner, and at the appropriate time, the government will work with investors to transfer the project and related assets to a new owner or owners. Investors such as Indigenous groups and pension funds have already expressed interest, he said.

"I think the business case for the project has deteriorated to the point where Kinder Morgan was no longer willing to assume the risk for it. Now the federal government is taking on that risk on behalf of the taxpayers," said Telford.

"If this was a slam dunk business decision, Kinder Morgan would have stuck with it."

"None of the other problems with this project have gone away. Nothing has changed except that Kinder Morgan is laughing all the way to the bank," said May, who was recently fined $1,500 for her arrest protesting the project in Burnaby.

"The amount we've just spent is more than we are putting into climate programs so far... I have to say that it's galling on so many levels that it's breathtaking."

"It's appalling that the federal government is willing to spend over $4 billion of our tax dollars to buy a Texas oil company's pipeline that massively increases climate pollution and puts tens of thousands of jobs and our coast at risk of oil spills," Robertson said.

With files from Clare Henning and Kathleen Harris