B.C. Premier Christy Clark unveiled her 19 cabinet ministers this afternoon in front of a crowd of hundreds of supporters at the Vancouver Convention Centre. 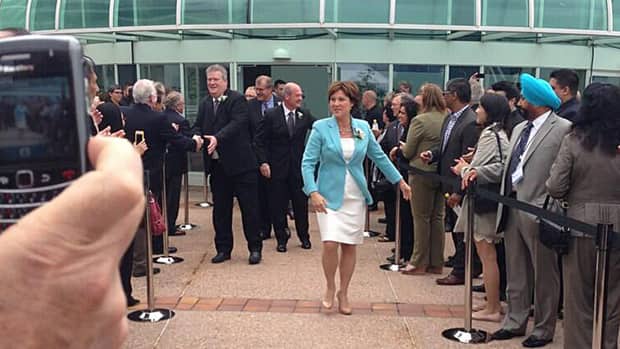 B.C. Premier Christy Clark unveiled her 19 cabinet ministers this afternoon in front of a crowd of hundreds of supporters at the Vancouver Convention Centre.

In all, the cabinet is composed of nine veterans, seven rookies and two politicians who have been backbenchers but will be elevated to cabinet.

During her speech Clark promised her government would table a balanced budget in each of the next four years while working to expand the economy.

"Together, we have the opportunity and obligation to grow the economy, control spending, and put B.C. firmly on track to a debt-free future," said Clark.

"To remain strong in the face of global economic uncertainty, we will accelerate our jobs plan and run a tight ship."

"We will respect families who simply cannot pay higher taxes. We will also respect future generations and not burden them with our debt, so when it's their turn to lead they can make their own choices."

Clark said Rich Coleman will lead the development of the province's liquifed natural gas industry as the first-ever minister in the new portfolio.

"Rich has been our point man for developing a liquefied natural gas industry in British Columbia and this is a crucial opportunity for us and it needs a man of Rich's talents, someone who can work with his colleagues all across government."

Opposition NDP Leader Adrian Dix said he was surprised by the size of cabinet, given Clark's focus on fiscal restraint.

"Thirty-four ministers and parliamentary secretaries is a lot," he said. "It's certainly not the message of fiscal control for politicians that they talked about in the campaign."

The previous cabinet had 18 ministers, not including the premier, while the new cabinet has 19.

Dix also said Clark's decision to appoint a minister in charge of a core review of government spending signals the Liberal pledge to balance its budget may be in doubt.

Throughout the campaign, the New Democrats said they estimated the Liberal budget to carry an $800 million deficit -- a claim the NDP based on its assertions the Liberals couldn't meet their own spending targets or sell off a list of government assets.

Clark added two new ministries — natural gas and international  trade — and did away with the position of minister of state for seniors.

She also renamed several ministries, including removing the phrase "open government" from the Ministry of Citizens' Services while shifting technology and innovation to that ministry from advanced education.

Three former ministers had either lost re-election or didn't run again. Ben Stewart, who was minister of citizens' services, has volunteered to give up his Kelowna-area riding to allow Clark to seek a seat in the legislature.

The new ministers will officially be sworn in on Monday at Government House by Her Honour, Lt.-Gov. Judith Guichon.

Clark, who lost her own Vancouver-Point Grey seat in the election, announced earlier this week that she will be seeking a new seat in an upcoming byelection in Westside-Kelowna.