Amateur video of the shooting of a mentally ill Vancouver man five years ago has prompted calls for B.C.'s police complaint commissioner and Crown prosecutors to take another look at the case. 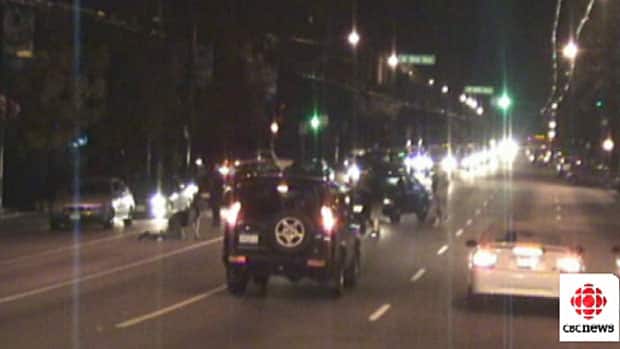 9 years agoVideo
4:10
The case of a Vancouver police shooting may be reopened after crucial video surfaced 4:10

New video of a fatal shooting by a Vancouver police officer nearly five years ago is provoking calls to reopen the investigation into whether it was justified.

The video shows the last moments of Paul Boyd, a 39-year-old mentally ill animator, who died after an altercation with Vancouver police in August 2007.

Boyd can be seen on his hands and knees on Granville Street, moving toward Const. Lee Chipperfield, who is pointing a gun.

The view is briefly obscured when Boyd crawls in front of a car, and Chipperfield fires the last of nine shots at him. The fatal bullet struck Boyd in the head.

The disturbing video is the only one known to be recorded of the incident.

It was captured by Andreas Bergen, a tourist from Winnipeg, who was visiting Vancouver with friends. At the time, Bergen didn't think his shaky, dimly lit video was valuable because there were dozens of witnesses closer to the scene than he was.

But in March of this year, B.C.'s police complaint commissioner issued a report, concluding there wasn't "clear, convincing and cogent evidence … that Chipperfield used unnecessary force or excessive force during his incident."

Bergen said he read an account of the decision and became concerned.

"I kind of felt guilty," Bergen told CBC News, "[Because] I have the tape and I think the tape will help to resolve some of that confusion. I don't think it was necessary to shoot Paul. Especially not eight times. And especially not in the head."

Not 'excessive in the circumstances'

The video didn't capture the entire event in which Boyd — who was suffering from bipolar disorder and paranoia — fought with police, striking two officers with a bicycle chain and lock.

The video also doesn't show Boyd absorbing punches from police, blows from their batons and even several bullets fired to his midsection, yet not giving up.

Although Chipperfield told investigators he thought Boyd was on his feet when he fired the fatal shot, a psychologist who was consulted by the police complaint commissioner theorized that the stress of the incident rendered the officer "inattentionally blind."

B.C.'s Criminal Justice Branch considered the case twice and both times concluded "there is insufficient evidence to establish that the officer's use of force was excessive in the circumstances."

Boyd's father said he appreciates that police have a lot of leeway when it comes to using lethal force. But after seeing the video, David Boyd said he believes Chipperfield should be removed from active duty, if not taken off the force.

Boyd said Vancouver police have never apologized for killing his son and, although he has come to terms with his son's death, he still finds the video disturbing.

Boyd said he appreciates for the first time how easily a bystander could have been injured by police gunfire. Chipperfield fired nine shots in total, but six bullets passed through Paul Boyd's body and one missed completely.

"And I'm not even angry at Const. Chipperfield, really. I'm sorry for him, really, if anything. I would hate to be in his skin right now, knowing what he's done."

David Eby, executive director of the B.C. Civil Liberties Association, said the video should lead authorities to re-examine whether the final shot was justified.

"I think that's the question people should be asking themselves when they look at this video and see a man who's disarmed, crawling on the road," Eby said after viewing the sequence.

There is a lull of 23 seconds between the eighth and ninth shots, during which time another officer managed to grab the bike chain Boyd had been wielding.

B.C.'s Criminal Justice Branch said after Boyd was killed, a pair of Vise-Grip pliers was found in his pocket.

But Eby said the video makes it clear to him that Boyd posed no threat to anyone before the final shot.

"I say a police officer needs to look at a scenario where someone is disarmed and crawling on the road, and say, 'I'm not gonna shoot this person in the head.' I would like them to make that call."

Lowe told CBC News that the video "appears to be a very important piece of evidence … I think probably the Criminal Justice Branch would be very interested in having a view."

The Vancouver Police Department turned down an invitation to see the video and declined to comment on whether it's significant.