A man was arrested during an Occupy Vancouver march following a B.C. Supreme Court decision to grant an injunction to end the five-week protest camp outside the city's art gallery. 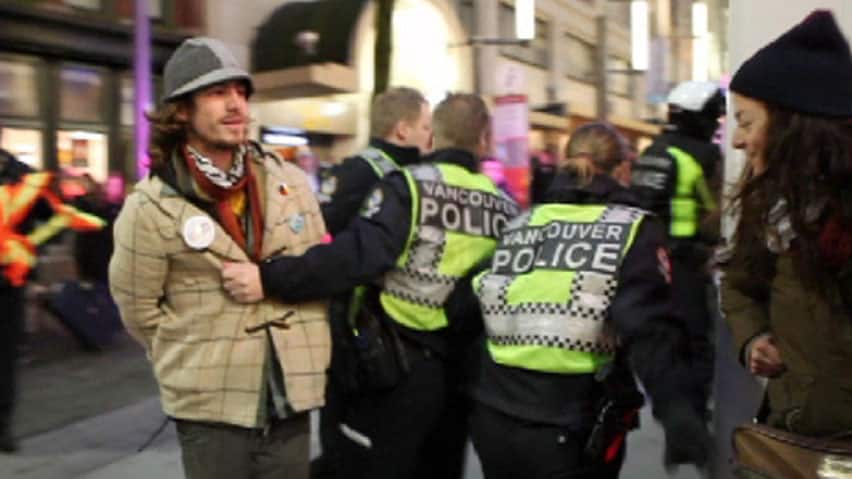 A man was arrested during an Occupy Vancouver march following a B.C. Supreme Court decision to grant an injunction, ordering an end to the five-week protest camp outside the city's art gallery.

A group of protesters marched a few blocks from the encampment to the headquarters of the Non-Partisan Association municipal political organization and began banging on the windows of the office, which was full of campaign workers preparing for Saturday's city election.

It's not known if NPA mayoral candidate Suzanne Anton was in the office at the time.

The man was arrested during the protest and taken into a police van.

Another group of protesters made their way to Vancouver City Hall, where a speaker demanded through a bullhorn that city politicians be more accountable to citizens and less beholden to corporate interests.

"Corporations are buying elections in Vancouver," the speaker said.

Justice Anne Mackenzie granted the interim injunction sought by the city to have the campers' tents removed from where they have been set up since Oct. 15.

MacKenzie set a 2 p.m. PT Monday deadline for the removal of the tents.

The ruling followed a three-day hearing in which city lawyers said the campers were trespassing, while lawyers for the Occupy movement invoked Charter rights of freedom of speech and assembly, and also said the camp was providing shelter for the homeless.

Vancouver Mayor Gregor Robertson said he was pleased with the court decision.

"The city certainly welcomes the injunction and having the weight of the Supreme Court's authority to support the city's goal to end the encampment," Robertson told CBC News. "It's time for the encampment to end, so we expect that protesters will now abide by that injunction and clean up their stuff, pack up and be off the site by Monday afternoon."

Earlier Friday, a judge in Victoria ruled Occupy Victoria protesters must pack up their camp by 7 a.m. Saturday morning.

But the judge also restricted the city's right to step in and immediately arrest anyone who defies the order.

Justice Terence Schultes said because of the protesters' respect for the law and their recent good behaviour, police would be required to return to court on Monday for an enforcement order if any protesters refused to leave the site.

The ruling comes after many protesters at the Victoria camp decided to pack up and leave voluntarily earlier this week, but protestor Anushka Nagji still calls the ruling a victory

"Not granting an injunction order goes to the fact that they recognize the peaceful nature of the assembly and criminalizing dissent, at this point, is not necessary," said Nagji.

About a dozen tents remain on the site and protester Justin Funke said the group is considering what to do next.

"I'm not sure what I'll do because it's a hard decision to make whether to resist," he said.

The judge also said he was not allowed to consider constitutional arguments in the case and could only rule on local bylaw issues.

Occupied by the homeless

In court on Thursday in Vancouver, a lawyer representing a woman who lived on the streets before moving into the camp compared the conditions in Occupy Vancouver's tent city and the city's own homeless shelters.

Lawyer Michael McCubbin argued the makeshift village set up by protesters is safer and has become "closely intertwined" with homelessness, so much so that forcing it to be dismantled would deprive his client.

"Many of the circumstances and the problems that the city has with Occupy Vancouver — as well as the movement's socio-economic grievances — wouldn't exist if housing was not such an issue and not so insufficient in the city of Vancouver," McCubbin told Associate Chief Justice Anne MacKenzie.

He said about 26 homeless people are currently living in tents on the lawn of the city's art gallery. The encampment was set up Oct. 15 as part of the global Occupy movement.

Of the group, 22 are men and four are women. McCubbin said his 28-year-old client, who he's representing for free, would face risks of sexual and physical violence if the tent city didn't exist.

Court heard the results of an informal survey of campers at Occupy Vancouver asking whether the site provided a safe place that wouldn't otherwise be available. It found eight of 12 women agreed, along with another 26 of 33 men.

Asked whether city shelters were a safe refuge, nine of 12 women disagreed, along with 23 of 33 men.

"It's the best information we have," he said.

McCubbin quoted the survey, which asked campers to describe their living conditions.

"I feel safer at Occupy Vancouver than any shelter," said a woman estimated in the survey to be 19 years old. "I'm not worried about getting followed by creepy men or getting hit on."

Another respondent, a man estimated to be 50 years old, described shelters as "smelly," while another 50-year-old said he was ganged up on at shelters because he is aboriginal. He said people at Occupy Vancouver are teaching him to read and write.

A 19-year-old respondent noted she could fall asleep at Occupy Vancouver knowing none of her personal belongings would get stolen.

"These are actually bigger problems in the shelters than at the Occupy Vancouver site," he said.

McCubbin referred to Metro Vancouver's annual homeless count, conducted last March, which notes a shortfall of about 465 shelter beds in Vancouver compared with the number needed.

There's never been an exact figure of how many people are residing overnight at the Occupy Vancouver site. The city's fire chief initially said upwards of 60 people slept in tents, and as the weather got wet and cooler, the number was reduced to as few as 15 to 25.

Numerous tents and structures have been removed and spaced further apart since the city was granted an interim order allowing firefighters to enforce safety regulations.