3 victims, 2 suspects dead: What we know about the northern B.C. cases

The deaths of three people in northern B.C. and the cross-country search for two suspects, later found dead, set Canadians on edge.

What we know so far about the deaths, suspects and twists and turns of the investigation

The deaths of three people in northern B.C. and the cross-country search for two suspects who were later found dead set Canadians on edge for two weeks.

The RCMP said Port Alberni, B.C., teens Kam McLeod and Bryer Schmegelsky were wanted in the homicides of tourists Lucas Fowler and Chynna Deese, and charged with second-degree murder in connection with the death of a Vancouver man found near Dease Lake, B.C.

McLeod, 19, and Schmegelsky, who would have turned 19 on Aug. 4, were found dead on Aug. 7. RCMP said autopsies suggest the pair died by suicide.

Here is what we know so far about the deaths, the suspects, and the twists and turns of the investigation.

The bodies of 23-year-old Australian Lucas Fowler and 24-year-old American Chynna Deese are discovered about 20 kilometres south of Liard Hot Springs, at a remote spot off Highway 97, also known as the Alaska Highway.

Police says the couple were shot and killed sometime on either July 14 or July 15.

The pair had been travelling and working their way through B.C. on a three-week road trip to Alaska. Liard Hot Springs is a popular tourist destination in the far north of the province; about 160 kilometres southeast of Watson Lake, Yukon.

A burning truck fitted with a sleeping camper is found 50 kilometres south of Dease Lake, which is about 500 kilometres west of Liard Hot Springs.

The vehicle belonged to longtime friends McLeod and Schmegelsky.

Police says the pair had not been in contact with their families for a few days. Both young men are from Port Alberni, on Vancouver Island.

Family members say the two were travelling north to Whitehorse to visit and look for work.

Shortly after police arrive at the truck fire, a passing motorist tells officers they had just seen what they believed to be a body at a nearby highway pullout.

RCMP found the body of a man about two kilometres away. Police have not revealed his identity nor the cause of death.

He was between 5 feet 8 inches and five feet 10 inches in height, with a heavy build, grey hair and a full grey beard, according to police.

Around this time, the public and numerous news stories begin to link the incidents, if only because it's unusual to have five people declared missing or dead under suspicious circumstances in Northern B.C. in the space of a week.

Surveillance footage captures McLeod and Schmegelsky inside a hardware store in Meadow Lake, Sask. The 16-second clip shows the pair walking down an aisle and leaving the store without any bags.

At this point, RCMP have not publicly named McLeod and Schmegelsky as homicide suspects. 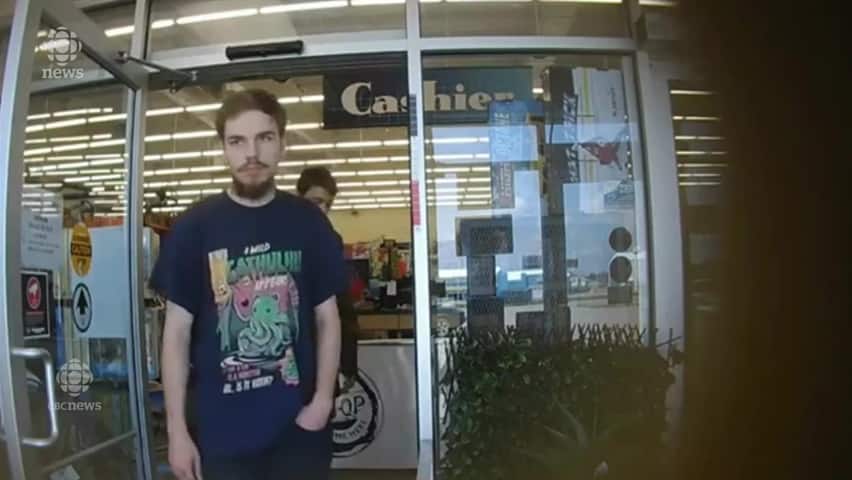 1 year agoVideo
0:16
RCMP have confirmed that Kam McLeod and Bryer Schmegelsky were seen in Meadow Lake, Sask. If spotted, the suspects should not be approached, and RCMP say 911 or local police should be contacted immediately. 0:16

A burning, grey Toyota RAV4 that police believe was driven by the fugitives was found on a dead-end road near Gillam, Man. Poice begin an expansive search of the community and nearby Fox Lake Cree Nation.

The harsh, northern Manitoba terrain around the area is thick, swampy and teeming with insects. Experts say it is inhospitable.

RCMP reveal the Port Alberni teens​​​​ are considered the main suspects in the three deaths. A manhunt for the two begins.

"We are asking the public if you spot Kam or Bryer, consider them dangerous. Do not approach, take no action and call 911 immediately," said RCMP Sgt. Janelle Shoihet.

RCMP confirm the burnt-out vehicle found in Manitoba on July 22 is the same one driven by McLeod and Schmegelsky.

Police dogs, a drone and heavily armed officers are seen combing the harsh, swampy terrain in search of the men.

Later that same day, RCMP identify the body found near McLeod and Schmegelsky's burnt-out truck near Dease Lake, B.C., as that of Leonard Dyck, a 64-year-old lecturer at the University of British Columbia. Mounties also announce McLeod and Schmegelsky are charged with second-degree murder in connection Dyck's death, and issue a Canada-wide warrant for the suspects' arrests.

Dyck leaves behind a wife and two children. In a statement, family say his death has thrown them into "unthinkable grief" as they "struggle to understand what happened."

After days of fruitless searching in the Gillam area, a credible tip redirects the search to York Landing, Man. — 90 kilometres to the southwest.

A member of the Bear Clan neighbourhood patrol group spotted two people who matched McLeod's and Schmegelsky's descriptions rummaging near the dump. More than a dozen heavily armed officers using ground patrol, K-9 units, drones and helicopters swarm the community of 500 and search through the night and into Monday. The community and York Factory Cree Nation are placed on lockdown and residents are asked to stay indoors.

RCMP hold a news conference to say officers have not been able to contact the individuals who were subject of Sunday's sighting, and police "are not yet in a position to confirm that these are the wanted suspects."

Cpl. Julie Courchaine said the goal of Monday's ongoing search is to apprehend the individuals and verify who they are.

After nine days of unsuccessful searching, RCMP announce they are scaling back search operations in northern Manitoba.

A damaged boat and several personal items linked to McLeod and Schmegelsky are found along Manitoba's Nelson River, which flows between Gillam and Fox Lake. RCMP would later say the personal items were the "one piece of evidence" they needed to finish the search.

RCMP find remains believed to be McLeod and Schmegelsky one kilometre away from the personal items located on Aug. 2, and eight kilometres from the burnt-out RAV4 found in July. The bodies are placed in caskets, loaded into RCMP planes and flown to the Manitoba medical examiner's office for autopsies.

B.C. RCMP confirm the bodies are McLeod and Schmegelsky. They say the autopsies suggest cause of the deaths was suicides by gunshot. The exact time of their deaths is not known, though RCMP say they were dead for several days before they were found. Officers also said they were alive for several days after the RAV4 was found, during the extensive search in Gillam, Man.

With the central suspects dead, answers about the B.C. killings may be difficult or impossible to find. RCMP investigators will continue their work long after the end of their search, as police can't consider the case closed until a Crown attorney decides if there was sufficient evidence to lay charges.

"Our investigators are committed to determining as much of that as possible, and we're hopeful that looking at everything now ... respecting we may never have a full understanding with regards to motive."