The B.C. government – for the first time – has released the travel expenses of MLAs after a scathing report by the auditor general said the legislature's financial books were a mess. 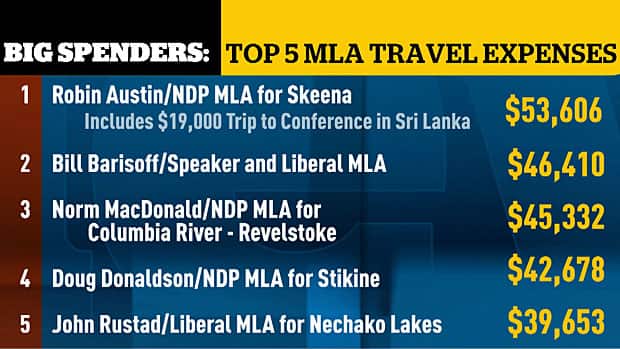 The B.C. government – for the first time – has released the travel expenses of MLAs after a scathing report by the auditor general said the legislature's financial books were a mess.

The biggest spender was New Democrat Robin Austin, of the riding of Skeena in B.C.’s northwest, who billed $53,606 during the period.

That figure includes a $19,000 government-sanctioned trip to a conference in Sri Lanka.

Expenses for Liberal Bill Barisoff, the speaker of the house, were $46,410, and Norm MacDonald, another New Democrat, billed $45,332.

Barisoff says B.C. residents want accountability on how their tax dollars are spent, and the release of the travel expenses helps meet that expectation.

But the posting of the expenses came only after Auditor General John Doyle released a report this summer, saying the financial books of the B.C. legislature were so chaotic that it was impossible to tell if money was being well spent.

Doyle's report found that MLA credit card bills are being paid without receipts and the legislative assembly hasn't produced financial statements despite a 2007 recommendation from the previous auditor general.

The figures don't include travel by the premier or cabinet ministers who were taking trips for their particular ministries. Those are already available online.

Jordan Bateman with the CanadianTaxpayers Federation says it’s good that the numbers have been released, but they lack the needed context.

Bateman is calling on MLAs to release all of their expense details, including what they spend on their constituency offices and staff.