The televised debate in B.C. began with the three party leaders explaining their approach to helping the province's economy recover from the COVID-19 pandemic.

NDP Leader John Horgan's decision to call an election during a pandemic and the B.C. Liberal promise to cut the provincial sales tax were the focus of attacks during a televised debate on Tuesday night.

But there were also clashes on pipelines, big energy projects, homelessness and who has the best plan to restore economic confidence after the COVID-19 pandemic as the leaders campaign for the Oct. 24 provincial election.

B.C. Liberal Leader Andrew Wilkinson said the NDP's approach to tackling the province's homelessness problem has been a "colossal failure."

Wilkinson said in communities across the province, people are living in tents as a result of the NDP's approach.

But Horgan said the problem didn't happen overnight, saying the government needs to "build up a system that was torn down over decades."

The standout moment of the night came more than halfway through the debate when the leaders were asked how they have reckoned with their own white privilege.

In his response, Horgan noted his upbringing on southern Vancouver Island.

"I did not see colour. I thought everyone around me was the same," he said.

The statement instantly sparked reaction on social media, with many describing the comments as "tone-deaf" and criticizing Horgan for failing to appropriately acknowledge the challenges faced by people of colour in British Columbia.

The Liberal leader's response to the question was also criticized after Wilkinson chose to answer it by referencing his background as a doctor and having an Indigenous baby named after him.

WATCH: The three party leaders were asked about their privilege and unconscious bias as white politicians. 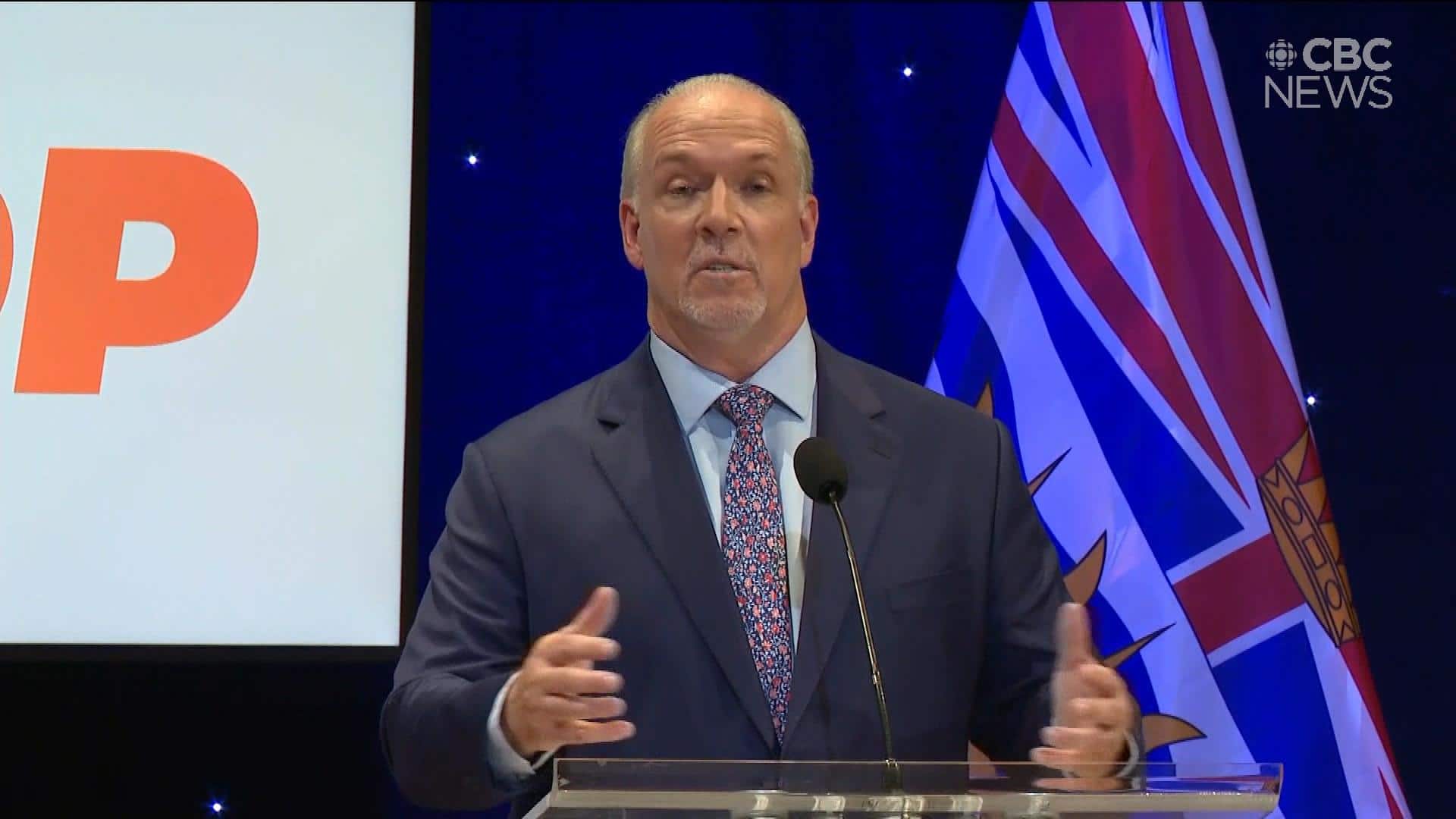 2 months agoVideo
1:19
The three party leaders were asked about their privilege and unconscious bias as white politicians. 1:19

Green Leader Sonia Furstenau's response to the question drew the most praise.

"The moment it hit home for me was imagining being a mother and imagining telling your child: 'If approached by a police officer, don't do anything and put your hands up,'" she said.

"The three of us cannot reckon what that's like because we are white. But we have to, in our roles, end that systemic racism."

Horgan heralded his government's Clean B.C. plan as leading in North America in the fight against climate change during the debate.

But Wilkinson said Clean B.C. has been a failure because greenhouse gas emissions have increased every year under the plan.

Furstenau chastised both of the other leaders for their support of big energy projects.

Furstenau said billions in taxpayers' money has been spent "propping up" those projects, money that could have created jobs by transitioning to an economy based on clean energy.

Furstenau said the B.C. Liberals' plan to cut the PST for a year will lead to cuts in services.

In a question to Wilkinson during the debate, Furstenau asked him to justify the promise, which would mean the loss of $6.9 billion in government revenue.

Wilkinson says the tax cut would "turbocharge" the economy by encouraging people to shop in the province.

But Furstenau says the decision will have consequences with cuts to services, including those for mental health and housing.

The leaders also clashed on their party's approach to health care.

Horgan accused the Liberals of cutting 10,000 jobs when they were in government to give higher-income earners a tax cut.

Horgan says that decision had "profound and tragic" consequences for senior citizens living in long-term care homes
during the COVID-19 pandemic.

But Wilkinson said Horgan is focusing on decisions made 17 years ago, arguing his party built 14 hospitals when it was in power and the NDP has built none during its first three years in office.

He also told Horgan the NDP has failed to get a hospital built in fast-growing Surrey.

Horgan said the reason a hospital hasn't been built is because the Liberals sold land slated for it. "You sold the land, man," he said directly to Wilkinson.

The televised leaders debate in B.C. began with the three party leaders explaining their approach to helping the province's economy recover from the COVID-19 pandemic.

Wilkinson likened the pandemic to a "wartime economy" and said governments around the world will be dealing with deficits as he defended his promise to eliminate the PST for a year.