A CBC News investigation exposing how a Maple Ridge couple paid little or no rent at several homes over the last two years is spurring renewed calls for a bad-tenants registry in B.C. 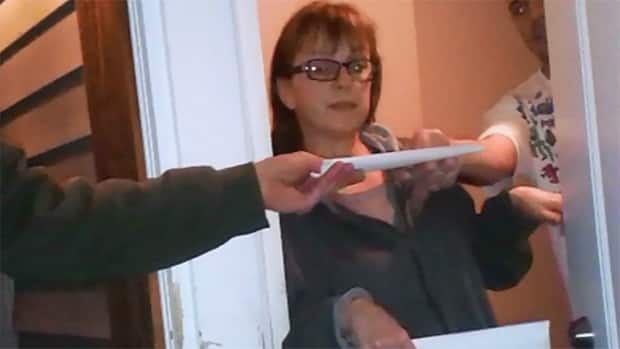 7 years agoVideo
2:12
Landlords want one place to identify tenants who pay no rent 2:12

A CBC News investigation exposing how a Maple Ridge couple paid little or no rent at several homes over the last two years is spurring renewed calls for a bad-tenants registry in B.C.

From August 2012 to this past March, five landlords lost thousands of dollars and ended up evicting Susan and Chris Perret from their properties for failing to pay the rent.

Amy Spencer, president of Landlord B.C., says tenants like the Perrets are exactly what her association want to warn its members about.

"Ninety-nine per cent of tenants are good, but it's those ones that get out there, like the ones in Maple Ridge, that give tenants a bad name," Spencer said.

Landlords who lost money to the Perrets are angry no one at B.C.'s Residential Tenancy Branch warned them about the couple's history of evictions.

"When people go around doing it professionally time after time, I mean, somebody — there should be a place that you can check," said landlord Noel Beaulieu, who said he was out $1,500 from the ordeal.

Kim Gouws, who evicted the Perrets last month, said she was frustrated there didn't seem to be a way to warn the next landlord.

"Every time I'd call I'd say,' what about the next person? They're just going to do this to another innocent person. How can I stop that?" she said. "I couldn't."

Gouws suggested that the Residential Tenancy Branch could keep track of cases like this and provide the information to potential landlords, but the minister responsible for housing says privacy laws make a bad-tenants registry impossible.

"That's not something that I think we'd even be able to come with a piece of legislation to. It would actually compromise  people's confidentiality," said the B.C. minister responsible for housing, Rich Coleman.

But the court-ordered eviction notices that CBC News obtained in the case of the Perrets are actually public documents. Anyone can search for them and buy them for $6 apiece online through B.C.'s civil courts registry.

B.C.'s housing minister says he would consider that.

"I do know they are doing some work on some of these things; they may bring us some proposals that we would certainly listen to," Coleman said.

What can landlords do?

In the meantime, Landlord B.C. members pay $150 a year and get credit and background checks on prospective tenants for just $8.

The association says it uses a screening company called Tenant Verification Service Inc., which is based in Surrey and gives small landlords the tools to assess credit worthiness of potential renters.

There are also several online services to help landlords weed out potential problem renters, such as Equifax, which produces credit-check reports starting at about $22.

3 tips for landlords for safe renting