Legislative Speaker Linda Reid came under fire Tuesday for racking up $120,000 in various expenses and renovations, including a new $48,000 touch-screen computer terminal.

Reporters question Reid about $120,000 bill for expenses and renovations 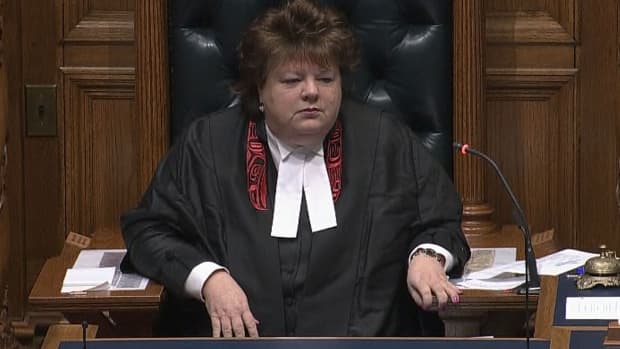 7 years ago
2:42
Linda Reid asked about hefty bill for expenses and renovations 2:42

Legislative Speaker Linda Reid came under fire Tuesday for racking up $120,000 in various expenses and renovations, — among them $48,000 in upgrades to the Speaker's desk, including an expensive new touch screen computer.

The spending, which comes in a time of financial austerity with many ministry budgets cut or frozen, also includes $13,000 for a new wheelchair-accessible MLA lounge featuring flat screen TVs and a $700 food display case.

Reid is also reportedly footing the bill for her executive assistant to commute back and forth between Victoria and Richmond, B.C. where she lives.

But the majority of the questions surrounded the new touch-screen computer terminal in front of the Speaker's chair.

"It's public money, and the public deserves to know how it's being spent."

However, B.C. NDP house leader John Horgan did not openly criticize Reid.  He says she is one Speaker who has been much more open with expenses.

"Is the staff issue a legitimate concern? Yes, it is. But I believe that Linda needs to be given some slack here because she's the first Speaker in 125 years to say, 'This is what I'm doing.'"

However, both the government and the opposition say they plan to talk to Reid about the expenses.

Reid, who has served six terms as the Liberal MLA for Richmond East, was appointed Speaker in July. Her office has an annual budget of $70 million and is responsible for approving MLA expenses and building amenities.