Rescue crews have called off a search after a fishing accident left a woman missing and a man drowned on the Cheakamus River near Whistler, B.C.

Man drowned and woman swept away while fishing on Cheakamus River near Whistler, B.C. 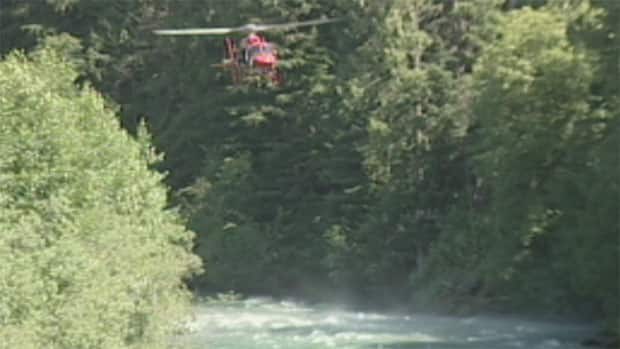 10 years agoVideo
2:39
Rescue workers call off the search for a woman missing in the Cheakamus River, the CBC's Deborah Goble reports 2:39

Rescue crews have called off a search after a fishing accident left a woman missing and a man drowned on the Cheakamus River near Whistler, B.C.

On Saturday, the woman and a male companion were out on a guided fishing tour when police say the woman hooked a fish and fell into the river.

The man jumped in to help but both were swept away by the fast-moving current.

The man's body was later found floating facedown in the river.

RCMP Staff Sgt. Steve LeClair said police believe the woman's body is submerged under a log or other natural feature.

"Search and rescue members that are skilled kayakers got in from the point last seen and carried on down the river until they got to a point where continuing by kayak wasn't feasible anymore and there was no sign of the missing person," he said.

"There are a lot of logs and debris in the river and that, of course, increases the hazard. So it is a dangerous place to be if you don't have a lifejacket on ... It's been described as quite dangerous in there."

Police have not released the names of the victims, saying only that the pair was from B.C.