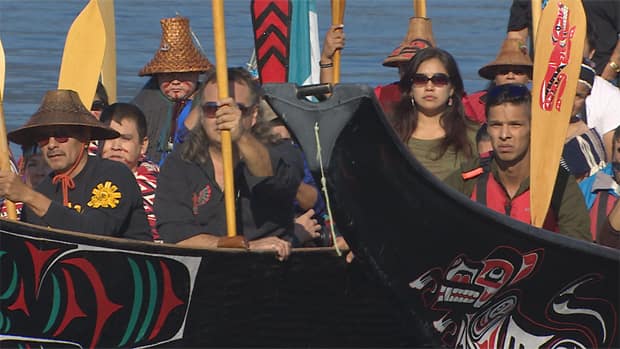 Protesters dodged tankers as they sailed close to the Westridge Marine Terminal, in a bid to stop Kinder Morgan nearly tripling the capacity of the pipeline, which carries crude oil from the Alberta oilsands to tankers in Vancouver.

The protest comes as cabinet ministers and senior bureaucrats head to British Columbia as part of a major government push to mollify opponents of building oil pipelines to the West Coast.

The new Harper initiative follows a report from the prime minister's special pipelines representative in British Columbia, David Eyford, who told Harper last month that negotiations with First Nations are a mess.

The Trans Mountain line stretches 1,150 kilometres between Edmonton and terminals in the Vancouver area and Washington State. It carries heavy and light crude oil, as well as refined products such as gasoline and diesel.

It has been involved in several recent spills including more 100,000 litres of light crude oil that was spilled at Kinder Morgan's Sumas terminal in January.

Meanwhile, an Enbridge official says the company expects a decision from the federal government on its proposed Northern Gateway pipeline by mid-2014, meaning the pipeline could be moving oil by 2018.

The Northern Gateway pipeline proposed by Enbridge would deliver 525,000 barrels of petroleum a day to a tanker terminal in Kitimat, on the north coast of B.C.