One in five hectares could be under extreme fire risk as temperatures continue to soar in the coming days, officials say. 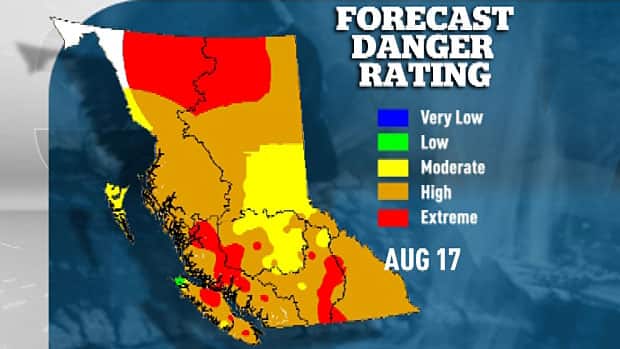 9 years ago
2:19
B.C. is expected to face the extreme dry, hot conditions seen in fire-torn Washington 2:19

The fire risk in much of the province is expected to increase as temperatures continue to soar in the coming days.

Officials predict one in five hectares, or about 20 per cent of the province, will be under extreme fire risk by the weekend.

"Right now the fire danger is moderate to high with many areas of extreme," said Erin Catherall with the B.C. Wildfire Management Branch.

"However, we are expecting a ridge to build across the province, bringing warm and dry conditions throughout B.C. This will make an impact on our fire danger rating and could increase the number of fire starts," Catherall said.

Extreme fire risk means forests are dry, receptive to the chance of fire, and any fires that start will spread quickly.

"So we are encouraging the public to be extra careful when they are in the backcountry and having camp fires," Catherall said.

The parts of the province with the highest fire risk are B.C.'s far north, parts of the west coast, Vancouver Island and the Kootenays.

The recent dry spell is blamed for the growing size of a forest fire near Squamish this afternoon.

It covers three hectares of steep, isolated terrain near Brohm Ridge. Crews are rappelling into the area and air tankers are en route.

Meanwhile, a grass fire that broke out yesterday in Vernon is now 100 per cent contained, officials said.

A crew of about 45 from the B.C. Forest Service and the Vernon fire department worked all day on the blaze, which briefly threatened two homes.

The fire scorched 36 hectares near a subdivision and golf resort in Vernon's Bella Vista neighbourhood, but no buildings were damaged.

An open burning prohibition has been in effect in the Southeast Fire Centre since July and is expected to remain in place until mid-September.

South of the border, wildfires are wreaking havoc in several western states.

In Washington, fires have already destroyed 60 homes. Another 400 houses have been evacuated.

The blazes, fuelled by searing heat, dry weather and strong winds added up to misery for weary residents who already are fed up with one of the region's worst fire seasons in decades.

Across California too, thousands of firefighters were contending with dry conditions and strong winds.

With files from the CBC’s Mychaylo Prystupa