The B.C. government is pouring $550,000 into a shipbuilding training centre at Camosun College in Saanich. 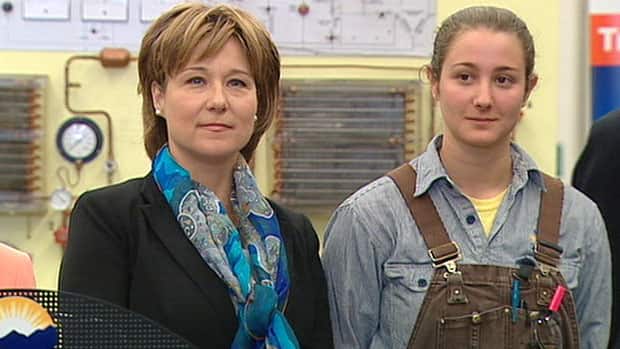 The B.C. government is pouring $550,000 into a shipbuilding training centre at Camosun College in Saanich.

Premier Christy Clark says the centre will help support the B.C.'s shipbuilding industry, just as a Vancouver company is vying for some of the $35 billion in federal shipbuilding contracts currently up for bid.

Seaspan Marine Corporation is one of four private companies across Canada bidding for the contracts, which will build naval, Coast Guard and other vessels over the next 30 years.

"I as your premier will do what it takes to make sure we get our share of this national procurement program for British Columbia," Clark said on a visit to the college Monday.

Clark said that is Seaspan's bid is successful, it could create 6,800 jobs in Vancouver and Victoria.

The Camosun program could help people like student and shipyard worker Mila Puharich, who said she hopes to upgrade her skills and use them close to home.

"It's stable work for a long time, doing lots of things," said Puharich.

Clark said Monday's education announcement in Saanich is meant to send a message that B.C. has the skills to build the ships the federal government needs.

"The shipbuilding industry has been such an important part of our province's history," Clark said. "We are committed to supporting the industry so that jobs will be there for generations to come."

With files from The Canadian Press and the CBC's Jeff Davies