Prosecutors and police met in Vancouver Monday to talk about criminal charges stemming from the city's Stanley Cup riot — although some in the legal profession say it could be very expensive to prosecute and hard to make charges stick. 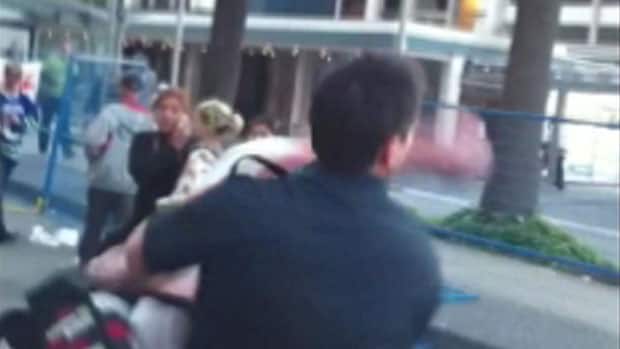 10 years agoVideo
2:11
Some Vancouver rioters expect to face charges because of the video and photo evidence online, the CBC's Robert Zimmerman reports 2:11

Prosecutors and police met in Vancouver Monday to talk about criminal charges stemming from the city's Stanley Cup riot — although some in the legal profession say it could be very expensive to prosecute and hard to make charges stick.

So far, about a half dozen people have been formally charged after the Canucks' Game 7 loss last week to the Boston Bruins, despite others turning themselves in to police.

Authorities have been looking at thousands of images of people destroying property or looting. Despite the wealth of evidence, however, Crown prosecutors aren't assured convictions, Burnaby lawyer Lee Rankin told CBC News, even with a picture or video of someone looting a store.

Vancouver's "wailing wall " is coming down Monday. The sheets of plywood covering broken windows at The Bay department store since last week's riot were to be removed later in the day.

Coun. Heather Deal said the city doesn't want to destroy the wall, on which people wrote their reactions to the destruction and mayhem.

People with suggestions for preserving the comments are being asked to contact city hall.

"They may have enough grounds to get the search warrants to go to that person's home and recover the item, 'cause it will be hard to charge them unless they link a specific item to that particular store," he said.

"Even if they see them taking it out, when you get to court, you have to probably have the stolen item."

British Columbia Premier Christy Clark has promised to pursue harsh punishments for those behind the mayhem, and some have predicted that 500 to 1,000 people to eventually face criminal charges.

Concerns have been raised that the charges could overwhelm B.C.'s justice system, which is already suffering from delays and dismissals of cases because it is unable to handle the caseload.

"If you're talking in the neighbourhood of 500 to 1,000 — it's not a huge amount if you look at a typical Vancouver docket in any given month. I don't think that's going to bung up the court system in Vancouver," he said.

However, Rankin said building a case against that many people could prove time-consuming and very expensive. Charges could include assault, assault with a weapon, break and enter, mischief, and theft, he said.

The B.C. Civil Liberties Association is raising concerns over the Insurance Corporation of British Columbia's offer to police to identify rioters through its facial recognition software.

Liberties association president Micheal Vonn said her group was always nervous about how ICBC would use facial recognition software and its database of driver's licence photos.

The civil rights group said ICBC was defensive when it first introduced the technology and promised that the system wouldn't be used for surveillance identification.

It has already been used to find fraudsters and identity thieves, but last week ICBC offered it to police to help identify rioters.

Vonn said she has concerns the technology could implicate people in the riots who didn't break any laws.

"Less than two years after they implement it, we are seeing exactly the kind of uses of it for purposes of broad-based surveillance identification that we had flagged right at the beginning," said Vonn.

Vonn said the ability to conduct giant sweeps of people associated with events could have ramifications.

"You see those Facebook sites, 'Here are the criminals from the riots,' etcetera, etcetera, and what they really are, are jerks. They are people dancing in front of a burning car, not necessarily the people that caught the car on fire," she said.

"The kind of information that is going into police records and databases — you know people are being prejudiced by these sorts of vague associational kind of hits and flags," said Vonn.

ICBC said around 100 insurance claims have come in since the riot.

"What we are really seeing is a mix of fire damage, broken windshields and glass, quite a few vehicles that have been total losses, either through the fire damage or there were some that were flipped on to their roofs as well," said spokesperson Adam Grossman.

Grossman said the damages claimed have all been covered by ICBC, and the provincially owned automobile insurance company isn't expecting to see many more claims from the riot.

In the aftermath of the riot, social media websites such as Facebook and YouTube have been filled with images of people looting and rioting, as online users seek to name, shame and help police track down the perpetrators.

But that's already turning into threats of vigilante justice, according to the lawyer representing one teenager who turned himself into police.

The family of 17-year-old water polo player Nathan Kotylak has moved out of their Maple Ridge home due to threats, according to their lawyer.

The teen turned himself into police, after social media sites posted pictures and video of a youth stuffing a burning rag into the gas tank of a police car.

The rising star on Canada's junior water polo team also took the extraordinary step of asking the courts to lift any ban on his identity so he could make an emotional public apology for his role in the riot.

Kotylak sobbed as he told a Vancouver television station during the weekend that his actions were "dumb" and he is prepared to face the consequences.

He said he's not looking for sympathy, but he wants people to know there have already been serious consequences for his actions, and he expects there will be more.

"On the social media they have been vilified, there have been some threats there were indications, you know, their address was posted. There were individuals saying they were going to come to the house, things of that nature, so they did leave the residence," said Findlay.

Kotylak's father, who is a surgeon, has also temporarily closed his office.

So far, no charges have been laid against Kotylak.