Safety experts in Canada and abroad say some quad deaths could be prevented with design improvements like roll bars. That idea has met stiff resistance from manufacturers and many riders.

Rollovers involved in at least half of quad bike deaths, safety expert says

Tim Pytel is doing something that scares him.

The 43-year-old pulp mill worker from Castlegar, B.C., is seating his two sons, nine-year-old Dawson and six-year-old Chase, on quads for a spin through the picturesque Kootenay woods.

Three years ago, Pytel's wife, Nicole, died at age 32 while riding a quad.

According to the coroner, Nicole lost control of her vehicle, rolled over an eight-metre embankment, and was pinned underneath it.

Ever since that day, Tim Pytel has thought about forbidding his kids from riding. But he doesn't want to take away what they loved to do with their mother.

"She was about taking them out on the quads, riding with them and experiencing nature and the outdoors," Pytel said. "Just because I was scared that something was going to happen, I couldn't let that fear take away from what they can enjoy."

Quads are four-wheeled, off-road vehicles with handlebars that seat one or two people and are sometimes referred to as all-terrain vehicles, or ATVs. But the term ATV also includes other machines, like side-by-sides or three-wheeled bikes.

From 2009 to 2018, an average of almost 13 people died in B.C. each year from ATV incidents. About half of those deaths involved rollovers, as happened in Nicole Pytel's case.

Safety experts in Canada and abroad say some of these deaths could be prevented, arguing design improvements like roll bars could reduce deadly risks. But that idea has met stiff resistance from manufacturers and many riders.

As a result, quad makers Honda and Yamaha have threatened to pull out of Australia, saying the effectiveness of the devices are unproven and may cause worse injuries in a crash. The manufacturers further argue driver behaviour is the largest contributing factor when it comes to quad safety.

David Sullivan, an Australian living in Kelowna, B.C., sells quad roll bars manufactured in his home country and insists they save lives.

His model consists of a flexing pole attached to the back of the vehicle, making the quad look a bit like a bumper car. If a rider were to tip over, he said, the pole can save them from death by crushing or suffocation, by creating a space between the quad and the ground.

Watch a test of the roll bar sold by David Sullivan, manufactured by Australia-based Quadbar: 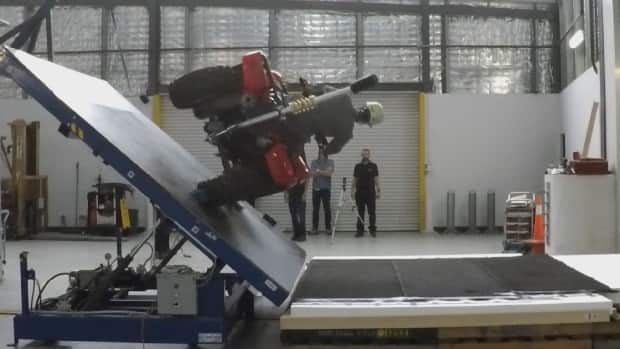 He believes the devices should be mandatory in Canada.

"This is absolutely a no-brainer," Sullivan said. "It will prevent families from experiencing grief."

Transport Canada confirmed the devices are not mandatory but said there is nothing stopping quad manufacturers from including them on their vehicles.

Don Voaklander, the director of the University of Alberta's Injury Prevention Centre, says quads have an "inherent instability" due to a high centre of gravity and relatively narrow wheelbase.

They're also heavy — usually 200 to 400 kilograms — and a rollover can lead to broken necks or a rider trapped underneath, unable to lift the machine off themselves.

"All of a sudden, you're in a situation that you can't correct," Voaklander said. "That's when you want a crush-protective structure to prevent that machine from rolling on you."

About 14 people die every year in Alberta from ATV incidents, Voaklander said. Men aged 20 to 35 are the highest-risk group, he said, and alcohol is involved in about half of all fatalities.

Beyond the death numbers, hundreds of people are hospitalized every year.

'A matter of time'

Roll bars, he conceded, can make vehicles safer but he doesn't believe they should be mandatory.

"If a person rides within the limits of the machine, you shouldn't have a problem," Matthews said. "It should be a personal choice."

Sullivan said he's heard that opinion before; it's why he got into selling roll bars.

Eight years ago, his wife's cousin, a logger in Merritt, B.C., rolled his quad and broke his back. He can walk now but suffered life-altering injuries. Sullivan described him as an experienced rider and that incident spurred him to look into roll bars in the first place.

"It's only a matter of time before you roll these things," Sullivan said.

As for Pytel, on the logging road with his kids, he remains skeptical about roll bars. He doesn't think one would have saved Nicole's life, but he admits it is possible.

"When you make a mistake, the consequences are instantaneous," he said. "When something goes bad, it goes bad now and quickly."

With files from Ethan Sawyer