A former self-described 'anti-vaxxer' says he regrets not listening to the science as his wife lies in a medically induced coma 800 kilometres from home.

A former self-described "anti-vaxxer" says he regrets not listening to the science as his pregnant wife lies in a medically induced coma 800 kilometres from home.

Now he's speaking out in the hope he can convince other vaccine-hesitant people to change their minds before it's too late.

Dwayne Binette, 43, lives in Fort St. John, B.C., with his 39-year-old wife and two children, aged 11 and 3. There, he says, he was surrounded by people who didn't take the risks of COVID-19 seriously.

Under 60 per cent of eligible people in northeastern British Columbia are fully vaccinated, and patients in need of critical care are being transferred to other parts of the province to reduce stress on local hospitals.

Binette says he and his wife had started talking to their doctor about vaccination when their 11-year-old came home with mild flu-like symptoms on Oct. 4. Soon after, both he and his wife tested positive for COVID-19.

His wife, a member of the Prophet River First Nation who is 27 weeks pregnant, deteriorated and by Oct. 11 had to be taken to hospital. She is now in a medically induced coma in New Westminster, roughly an 800 kilometre flight or 1,200 km drive from Fort St. John.

She is hooked up to an ECMO machine, which replaces lung function in a bid to try to save her life.

Binette says doctors are uncertain about the survival chances of his wife or their unborn baby and every day he wakes up hoping they are still alive.

"When you're away from your wife who's dying in the hospital and you're under quarantine and your kids are asking where mom is, I mean, it's pretty tough," he said.

Binette spoke to CBC News about why he didn't believe the science of COVID-19 vaccines and how he hopes other people can have their mind changed. The interview has been edited for length and clarity.

Dwayne, you said that before all this, you were a pretty open anti-vaxxer. That's how you described yourself. Can you tell me about that?

Yes, you're correct, I was. I was pretty much against this thing.

"Is this safe? Is this safe for my pregnant wife?" I was pretty dug in. I was going to wait and see. Obviously, I made the wrong choice.

2 months ago
0:58
B.C. provincial health officer Dr. Bonnie Henry is encouraging people who are pregnant, planning to get pregnant or breastfeeding to get vaccinated against COVID-19. 0:58

Why is it that you didn't believe it when the government said everybody should get vaccinated, and there were news reports saying the safest thing is to get vaccinated — why didn't that connect with you?

I think in my area there's a lot of distrust toward the government. We haven't had a fair shake out here. So I think that plays a part. Also, there's a large amount of misinformation out there, especially with social media. It seems to play off of that and instead of doing the right thing and talking to the health professionals — doctors and nurses dealing with this pandemic — people seem to want to be able to just believe what they read on the internet, which isn't a correct way to do things.

I mean, if I could go back and change things, I definitely would. I was pretty set in my ways against getting this vaccination. I had multiple arguments with the family, with people on social media. It turns out that vaccination is a life-saving thing.

When you talk about not getting a fair shake, what are you talking about?

There's quite a few things in this region and the north, we seem to be left out. We're a smaller population than bigger cities, so it doesn't feel like our opinion counts. So when you have a lot of the decisions being made about our area from a different location, it's sometimes hard to accept.

As well, government doesn't seem to consider how it affects us up here. They seem to want to make decisions without even knowing how that will affect us in this area.

So that just turns into a knee-jerk, you don't believe anything they tell you?

I think having so much misinformation out there is a big thing.

I think having government do things in a way that is more comforting to people, so that they can explain things, in a way, and not just come down and order it to be done or else there is going to be consequences. This would make a real big difference.

You would know people who didn't believe [COVID] was a problem and, unfortunately, there's some people who might listen to your story and still not change their mind. They'll just think it's another bit of media hype.

I would suggest to them this is a life-saving measure. If you see a speeding truck about to hit one of your family members, you would jump into action and save their life. This is the same thing we have. We have a chance to save our friends' and families' lives, and we need to take that opportunity to do that. We need to get vaccinated.

This is for real. This is a life-saving measure. They're not guaranteeing that you won't get COVID [after] being vaccinated, but what they're saying is this will save your life. You won't end up in such a serious condition as my wife is in. So, if I could go back in months, I would have our whole family vaccinated and her life would be saved right now. I am sure of it.

Listen to the interview below: 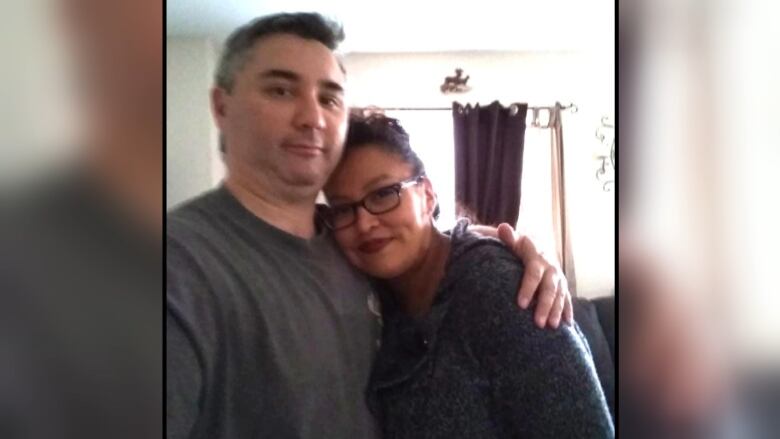 Daybreak North7:35'I was wrong': Former anti-vaxxer on why he and his wife didn't believe in getting shots until it was too late
A former self-described anti-vaxxer says he regrets not listening to the science as his pregnant wife lies in a medically-induced coma 1,200 km from home. 7:35
CBC's Journalistic Standards and Practices|About CBC News