A handful of attendees at a far-right rally were shouted down by thousands of those at a counter-protest.

Several outnumbered far-right protesters escorted away from crowd, one in handcuffs

Around 4,000 people showed up at Vancouver City Hall to protest against a far-right rally on Saturday afternoon.

Tensions rose briefly as protesters from opposing sides began yelling at each other, but Vancouver police quickly escorted several far-right demonstrators away from the crowd. One protester was in handcuffs. 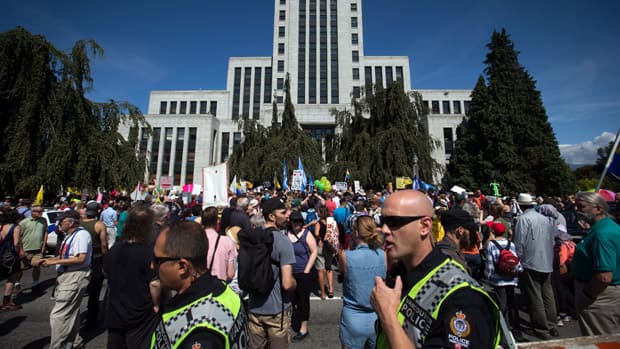 3 years ago
1:11
More than 4,000 people showed up at Vancouver City Hall to protest against a far-right rally on Saturday 1:11

"Officers made five arrests for breach of the peace, and two people were escorted out of the rally to prevent a disturbance," wrote Sgt. Jason Robillard in a release. "There were no reported assaults and no injuries."

Plans for the far-right demonstration began circulating on social media earlier in the week, not long after a deadly white nationalist march in Charlottesville, Va.

Man in handcuffs escorted away from city hall by Vancouver police. Still in cuffs. <a href="https://t.co/04P1wpOdxY">pic.twitter.com/04P1wpOdxY</a>

According to a Facebook page for the event, the rally is protesting Islam and the Canadian government's immigration policies. The page is no longer live, but the demonstration was expected to begin around 2 p.m. PT.

By 3 p.m., a handful of far-right protesters appeared to have gathered. They held Confederate flags and the "alt-right" symbols for Pepe and Kekistan. One wore a shirt in support of U.S. President Donald Trump.

Counter-protesters started streaming into the city hall area — as well as the nearby SkyTrain station and surrounding streets — around 12:45 p.m. PT.

Upbeat music and cheers could be heard from neighbouring apartments.

Isabelle Rowe-Codner, one of the anti-racism rally's organizers, said the number of attendees for the counter-rally doubled in a day.

"We've gotten so much support ... It's all been happening so quickly," she said on Friday.

Organizers said the counter-protest is peaceful, "essentially" there to outnumber the far-right protesters and "give our voice some say."

Sounds like more of a party than a protest. Listen: <a href="https://t.co/uzuWjstHpC">pic.twitter.com/uzuWjstHpC</a>

Rowe-Codner said the group took extra security measures as its numbers grew, and volunteers will be watching the counter-protest crowd closely to keep the peace.

"We are going to have many people who are vulnerable attending … If anybody instigates something from our side, it'll be those [vulnerable] people [in our group] who are most likely targeted by white supremacists," she said.

"If those affected by white supremacy and racism felt unsafe at our rally, then we wouldn't be doing our job."

Rowe-Codner said the coalition saw some pushback about the rally earlier in the week, and not just from the far-right.

"A lot of people [who lean left and central] are saying, maybe if you ignore this situation they'll go away ... But there are a lot of people and communities out there that face white supremacy and who can't ignore it," she said.

"We can't let this problem grow and grow until it becomes a situation like Charlottesville."

On Wednesday, Vancouver Mayor Gregor Robertson condemned the far-right rally, saying "hatred and racism have no place" in the city.

He said people have the right to demonstrate and the city can't shut an event down, but city staff will be working to ensure the events are peaceful.

Premier John Horgan also made a statement supporting the counter-protesters, saying the province rejects "all forms of racism, discrimination, intolerance and bigotry."

With files from Tina Lovgreen