Hundreds rally in Metro Vancouver and Victoria in solidarity with Wet'suwet'en

Hours after police arrested dozens of protesters for blockading port entrances in Vancouver and Delta, B.C., marches were held in Vancouver and Victoria in support of the Wet'suwet'en First Nation and its fight against a pipeline.

Hours after police arrested dozens of protesters for blockading port entrances in Vancouver and Delta, B.C., marches were held in Vancouver and Victoria in support of the Wet'suwet'en First Nation and its fight against a pipeline.

In Victoria, protesters blocked the Johnson Street and Bay Street bridges during afternoon rush hour while, in Vancouver, police warned drivers to expect delays as demonstrators blocked intersections and marched through the downtown core.

In recent days, small-scale protests have emerged across Canada in solidarity with the Wet'suwet'en hereditary leaders' opposition to the construction of a gas pipeline through their traditional territory in northern B.C. Over the weekend, the RCMP arrested 21 people blocking Coastal GasLink workers from accessing the site.

On Monday morning, Vancouver police arrested 43 demonstrators at the Port of Vancouver as they enforced an injunction against those blocking access to the site.

Dozens of officers arrived at the intersection of Hastings and Clark streets around 5:30 a.m. PT Monday, and the injunction was read several times over a loudspeaker. Police then removed barricades blocking access to the port, reopening the ramp to vehicles. 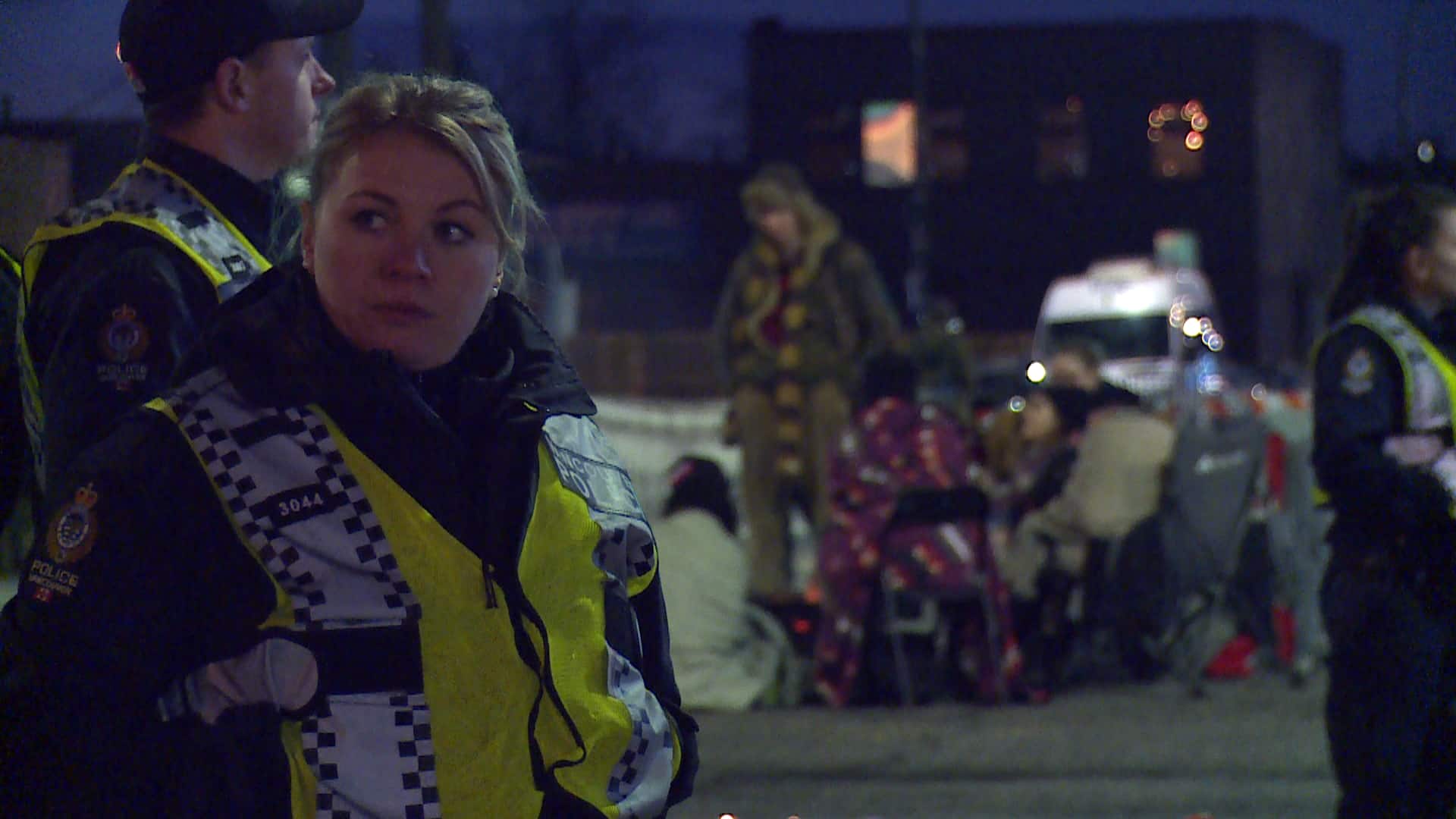 12 months agoVideo
1:38
On Monday morning, officers enforced an injunction against supporters of Wet'suwet'en hereditary chiefs who were blocking access points to the Port of Vancouver. 1:38

Shortly after 6 a.m., about a dozen protesters remained around a fire burning in the roadway. Officers reminded people they would be arrested if they stayed in the road. By 8 a.m., the police had cleared all demonstrators from the intersection and put the fire out. At midmorning, police had removed all barricades, and traffic reopened.

All of those arrested in Vancouver have been released on the condition they abide by the injunction, according to police.

Whess Harman, a multidisciplinary artist from the Carrier Wei'at Nation, said non-Indigenous volunteers had remained in the roadway as a strategy to prevent Indigenous youth protesters from being arrested.

Demonstrators had blocked two other port entrances in Vancouver, and the Delta port, where local police arrested 14 protesters early Monday morning. Delta police said an ambulance was called for one person "out of an abundance of caution." Protesters had first blockaded the port on Feb. 8.

According to Finn, neither freight nor passengers have been able to move in or out since Saturday. He said the disruption is affecting the national economy, as consumer goods are stuck in the port and grain and coal aren't able to make it to market.

In Vancouver, there were reports of a firecracker and a few bottles being thrown in the crowd, but the situation appeared fairly peaceful, with officers telling people they can remain in the area, but must contain themselves to the sidewalk.

"We are peaceful people, and no one is here to incite any violence," said Harman Monday morning, adding they will not stand down until the RCMP withdraw from  Wet'suwet'en territories.

Jordyn Myers, a 16-year-old from the Squamish First Nation, spent the night at the port, singing and dancing with other protesters. She came out to voice her disapproval of the pipeline's environmental impacts and show solidarity with the Wet'suwet'en people, who she said have experienced an "extreme violation" of their Indigenous rights.

Speaking as a guest on CBC Radio's The Early Edition, Environment Minister Jonathan Wilkinson said these protests make clear that a significant portion of people remain firmly opposed to the project. He noted, however, that 20 local First Nation band councils continue to support the pipeline's development, despite the opposition of the Wet'suwet'en hereditary leaders.

Wilkinson added that jurisdiction dictates this project as primarily a provincial matter.

With files from Yvette Brend, Bridgette Watson and Ben Mussett