A Kamloops, B.C., man is celebrating after landing one of the biggest fish ever caught in the Fraser River — the second giant fish caught in the river in recent months. 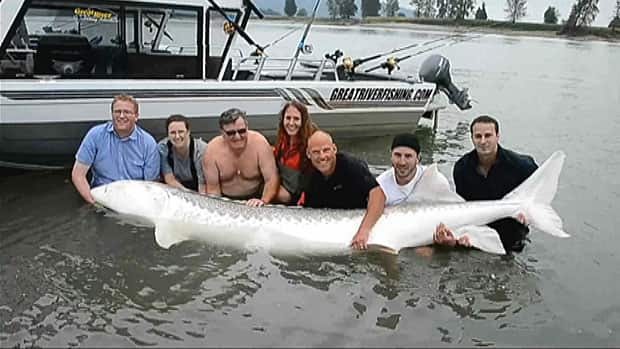 A Kamloops, B.C., man is celebrating after landing one of the biggest fish ever caught in the Fraser River — the second giant fish caught in the river in recent months.

Norman Daley was out on a company fishing tour near Chilliwack Friday when he landed a white sturgeon more than three-and-a-half metres long and weighing nearly 500 kilograms.

"The first thing we saw was its tail and we went ‘Holy smokes, that's a monster fish,’" said Daley. "Twenty minutes later, we got it to shore and we found out how big it was."

Daley and his team tagged the massive sturgeon and released him back into the waters.

"That was the third time I had ever been sturgeon fishing and the biggest one I had seen before that was a couple hundred pounds," he said. "It was just, you know, humbling experience to be able to catch an animal that large."

In July, a British tourist hooked one of a similar size and reeled it in after a 90-minute struggle.

Sturgeon of this size are very old, said Marvin Rosenau, an instructor at the British Columbia Institute of Technology’s School of Environment.

"These aren't fish that were just born, last week, last year, last decade, last half century," said Rosenau. "These were born around the time of the start of Canada."

Rosenau said it's unusual to see two record-worthy sturgeons caught in one year.

"The fact that we have seen these two fish may be random, or maybe it says something. But until we see more fish, I guess the question is whether there is a lot more that are just going to magically appear."

With files from the CBC's Emily Elias and Brady Strachan