A disturbing video purporting to show animal abuse at Excelsior Hog Farm in Abbotsford sparked a protest and sit-in last year at the farm.

Amy Soranno, Jeff Rigear, Roy Sasano and Nicholas Schafer are charged with a combined 21 counts of break and enter and mischief.

Protesters gathered outside both the Abbotsford courthouse and Abbotsford SPCA waving signs and carrying banners in support of the accused.

On April 28, 2019, members of the Meat the Victims animal rights group, entered the farm and staged a sit-in.

The group was reacting to a video released by PETA of the living conditions of the animals at the farm, which sparked an investigation of Excelsior by the B.C. Society for the Prevention of Cruelty to Animals.

It showed female pigs and their piglets living in confined gestation crates alongside the bodies of deceased pigs in varying stages of decomposition.

At the time, Excelsior co-owner Ray Binnendyk said the PETA video was shot in secret by someone trespassing at night, and suggested that some of the images may have been staged.

The BCSPCA called the video "troubling," but did not end up pursuing charges against Excelsior because it was unable to determine the source or veracity of the footage.

In a statement, Soranno, who is facing seven charges, said animal agriculture businesses abuse animals with impunity, while activists who attempt to expose the problem end up in court.

"The industry regulates itself, meaning it doesn't regulate anything that would eat into profits," she said. 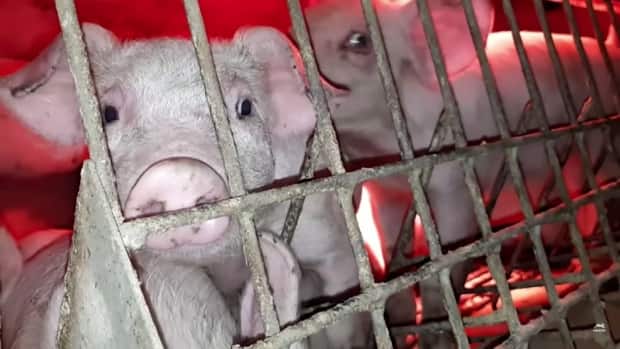 Video alleged to be from Excelsior Hog Farm

2 years ago
1:41
Video submitted to PETA allegedly shows the poor conditions female pigs and their piglets are kept in. 1:41

"This should concern anyone who cares about transparency and accountability — and the charges against us prove only that the animal agriculture industry is desperate to conceal the pain and suffering it inflicts."

"The way they have responded to the footage from Excelsior Hog Farm, which is [with] blatant inaction, the SCPA is not only not following their own mandate, but they broke their own policy when they turned over the identity of a whistleblower to the Abbotsford Police Department," she claimed.

Thursday's hearing was put over until Nov. 2.

None of the charges against the activists have been tested in court.