'I had to crawl': Amputee seeks damages after United Airlines and airport security seize scooter batteries

A B.C. man says airline officials and airport security agents were violating the law when they seized the lithium batteries he needed to operate a portable scooter. Now he's fighting to take his case to the Canadian Human Rights Commission.

Stearn Hodge says he will never forget the humiliation of having to drag his body across a hotel room floor during what was supposed to be a vacation celebrating his 43rd wedding anniversary — because a security agent at the Calgary International Airport and United Airlines confiscated the batteries he needed to operate a portable scooter.

"Having to crawl across the floor in front of my wife is the most humiliating thing that I can think of," said Hodge. "It unmasks how real my disability is … I haven't been the same since."

The 68-year-old retired contractor from Kelowna, B.C., lost his left arm and right leg in a 1984 workplace accident. He now relies on a portable scooter powered by lithium batteries.

But on a trip to Tulsa, Okla., on Feb. 26, 2017, an agent with the Canadian Air Transport Security Authority (CATSA) and a United Airlines official told Hodge to remove the $2,000 battery from his scooter and fly without it, as well as his spare battery.

In making the demand, both employees cited safety concerns.

Stearn Hodge shows how he had to crawl when he didn't have his mobility scooter: 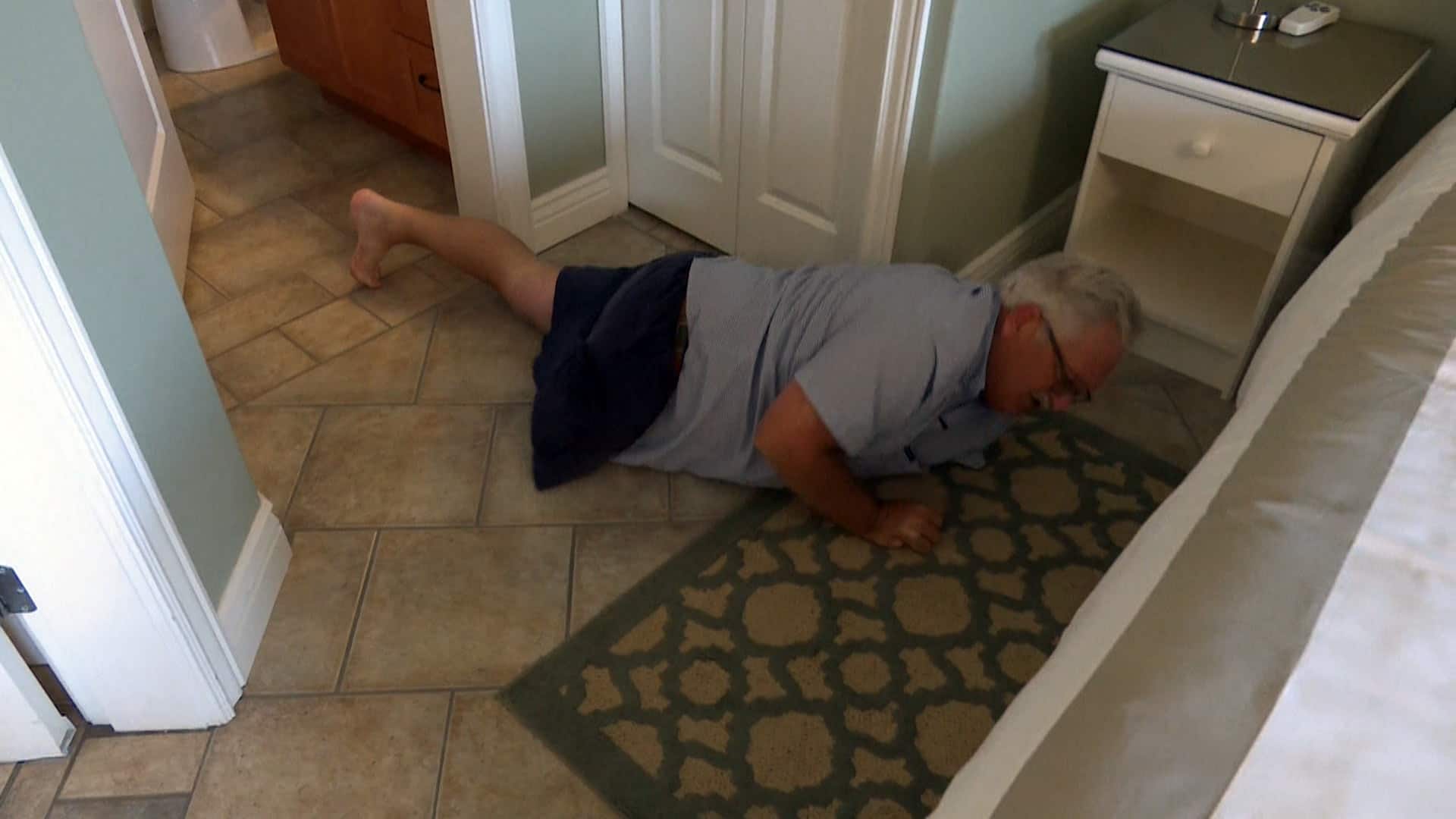 2 years agoVideo
3:18
Stearn Hodge demonstrates how he was forced to crawl on his holidays, after United Airlines and an airport security agent seized the batteries needed for his portable scooter. 3:18

Hodge said no one from CATSA or United Airlines would listen to him or read IATA documents he had printed out, showing his batteries are permitted on board if an airline gives prior approval. Hodge had received that permission.

"They're taking my legs — and not only that, my dignity," said Hodge.

He can only wear a prosthetic leg for a short period due to discomfort and risk of infection, he said.

A few months earlier, Hodge almost had his batteries seized on a WestJet flight. But "seconds" before takeoff — and after he suffered a panic attack — Hodge was granted permission to take them on board.

He has now hired a lawyer and is fighting to have his case heard before the Canadian Human Rights Commission.

A spokesperson for an Ottawa-based disability rights organization says it's "frustrating" that Canada's airline industry seems to ignore hard-won protections for people with disabilities.

"It's been a long fight to make sure that mobility devices — or any device used to accommodate a person with a disability — can be carried on [a plane]," said Terrance Green, of the Council of Canadians with Disabilities.

"When security can — even with regulations in place — seize what otherwise should be able to go onto the aircraft, that leaves people with disabilities very vulnerable."

When the CATSA agent seized his batteries in Calgary, the employee suggested it wasn't a big deal, Hodge said.

"I still remember the CATSA agent saying, 'Well, you could get a wheelchair.' How's a one-armed guy going to run a wheelchair?" asked Hodge. "How am I going to go down a ramp and brake with one hand? But that shouldn't even have to come up."

Hodge's wife had recently undergone cancer treatment, which affected her spine, and she couldn't push a wheelchair for her husband.

Hodge said he asked for an agent from United Airlines to come to the security checkpoint, as he had called the airline earlier and was assured it was OK to bring his battery and a spare on board.

But the United Airlines employee that arrived sided with the security agent.

Consequently, a three-week trip that was supposed to be a celebration with his wife resulted in Hodge spending much of his vacation confined to his bed.

To perform basic personal hygiene, he was forced to drag himself across the hotel room floor to the bathroom.

"An anniversary is supposed to be all about remembering how you fell in love … and keeping that magic alive," said Hodge. "And those things were denied. I'm crawling across the floor and it is pathetic."

A United Airlines spokesperson told Go Public that it couldn't comment on Hodge's experience, as he wants his case heard by the Canadian Human Rights Commission.

In an email sent to Hodge by the airline, complaint resolution official Tatricia Orija wrote that "it appears we were in violation of federal disability requirements," offering both Hodge and his wife an $800 travel certificate.

She also apologized for the "inconvenience."

"Inconvenience is when it rains on your holiday," said Hodge. "This was a … life-changing moment for me and my wife."

Three months before the United incident, on Nov. 27, 2016, Hodge had also run into battery problems while travelling to Cancun, Mexico.

In that case, a WestJet employee initially told him he could take the batteries in a carry-on, but when he got to the security checkpoint, a CATSA agent said the batteries had to be in checked luggage.

"According to federal airline law, that's the worst place you want to put them," said Hodge. "Because if a problem develops with those batteries, they don't know where they are and they're only going to find out about it when it's too late."

Minutes before his departure, a WestJet employee was able to confirm that the batteries could go on the plane.

In an email to Hodge, a WestJet customer support agent wrote: "While I cannot change your past experience, I would like to offer you a $350 future travel credit as a goodwill gesture."

WestJet spokesperson Morgan Bell told Go Public he couldn't comment on the case since it is before the courts but that "WestJet will always err on the side of caution and supports the due diligence of its people evaluating any items they believe may pose a safety concern."

The agency did provide Hodge with a transcript of a recorded call with client service agent Justine Drouin, who apologizes to Hodge and says "all of the screening officers will undergo a briefing."

Hodge and his wife travel at least once or twice a year and say the only place they run into trouble with his scooter batteries is in Canada.

"I have flown through Europe, the United States and Mexico since 2015 with these batteries and have never been detained or harassed because of them. It is only in Canada that I have been relentlessly detained," said Hodge.

He estimates it's happened more than a dozen times in the past two years, saying it now triggers severe anxiety.

"When I go through the checkpoint, I'm starting to vibrate now. I don't know what I'm going to get. It's like playing Russian roulette."

'An assault on a person's dignity'

Green, of the Council of Canadians with Disabilities, said while he's pleased there are protections in place for people with disabilities who are travelling, those protections need to be enforced.

"This is an assault on a person's dignity," said Green, noting his organization has been fighting over transportation issues for four decades.

"In 1979, the government of the day said, 'Yes, we will make our transportation system accessible,'" he said. "Here we are … 40 years later and the same barriers are there in transportation for Canadians with disabilities."

Green, who is visually impaired, said he has had security agents question the battery in his laptop, which allows it to "talk" when it is turned on. He said he receives "a lot of emails and telephone calls" from people with disabilities who have been hassled at the airport.

"It happens very, very frequently," said Green. "You put in complaints, the first thing that happens is the airlines deny."

Go Public asked the Canadian Transportation Agency, which regulates air, rail and marine travel, how often people have filed disability-related complaints over the past three years.

A spokesperson said the agency has received 583 accessibility complaints related to air travel during that time — with fewer than one per cent related to batteries. And those numbers have steadily increased since 2016.

The majority of complaints related to the transport of mobility aids are from passengers who have had expensive mobility devices — scooters and wheelchairs — damaged.

Last September, the Canadian Human Rights Commission referred Hodge's complaint to the Canadian Transportation Agency. However, the agency has no power to award general damages beyond out-of-pocket expenses.

On May 9, Hodge's lawyer, John Burns, will ask a Federal Court judge to compel the commission to hear the case.

"It's a failure of the Canadian Human Rights Commission to grant access to the remedy that the statute provides," said Burns.

The Canadian Human Rights Act allows for up to $20,000 in damages for each count of pain and suffering, and up to another $20,000 if the discrimination is "willful or reckless."

"It sends a very clear message to the airlines and everybody else involved," said Burns. "People with disabilities should be taken seriously. You don't take away somebody's legs and then describe it as an inconvenience. No, this is an injury."

Hodge is optimistic he'll eventually have his day before the Canadian Human Rights Commission.

It's a pricey endeavour. In order to cover legal costs, he's had to put up for sale a cherished Corvette he has worked on for years. But it's a fight he says he has to have — not just for himself, but for so many others with disabilities.

"The thing I would love more than the compensation," said Hodge, "is the [legal] decision that someone can go to and say, 'You did it here, you can do it for me.'"

We want to hear from people across the country with stories you want to make public.

Submit your story ideas at GoPublic@cbc.ca.